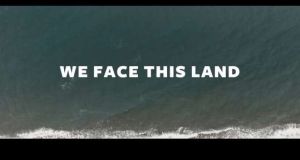 Women involved in the Repeal Project have released a short film as part of their movement to repeal the Eighth Amendment of the Constitution.

We Face This Land was shot on a Sunday morning on Greystones Beach, in Co Wicklow and involved almost a hundred women. The video has so far been seen by 120,000 people.

The video originated in a conversation two months ago between writer Sarah Maria Griffin and director Dave Tynan.

The Eighth Amendment of the Constitution was passed in 1983 and is a constitutional ban on abortion.

It means that except in limited circumstances, abortion is illegal in Ireland.

In the video the women wear t-shirts with the ‘Repeal’ logo which has become a visual part of the campaign.

A Citizens’ Assembly on the issue is to be held next month and will see 100 people from all walks of life debate the possibility of holding a referendum to repeal the 8th amendment.

The assembly will then send its proposals to an all-party Oireachtas committee for consideration.

There is significant opposition to abortion in Ireland with the Pro-Life Campaign opposed to repealing the amendment on the grounds that it would lead to terminations taking place in Ireland.

Anna Cosgrave of Repeal Project said the video presented a “trifecta of visuals, words, and the stark black and white of the political message seeking repeal.