After his ship was torpedoed of the coast of Donegal, Derek Cragg was rescued by local man Tully McGowan. Their sons met up on Arranmore 60 years on 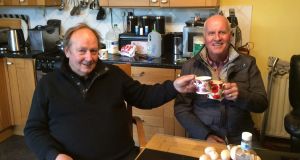 Mannie McGowan with Ian Cragg – McGowan’s father, Tully, rescued Ian’s father, Derek, off a raft that had been swept into a sea cave at Bellachreesh on Arranmore Island in 1945 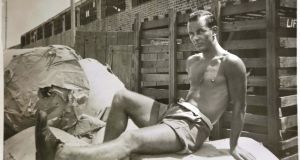 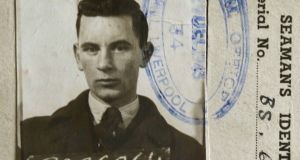 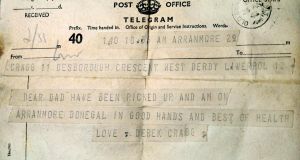 The telegram sent on the day of Derek Cragg’s rescue, April 26th, 1945

On the rocky beach at Bellachreesh on Arranmore Island, Ian Cragg stirs at something with the toe of his boot. It’s a broken old high-heeled leather shoe blackened by seawater and rain. “Here’s something we didn’t know,” he jokes

. “My Dad the transvestite.” He has been brought to this remote bay on the far north coast of the Co Donegal island by Mannie McGowan whose father, Tully, rescued Ian’s father, Derek, off a raft that had been swept into a sea cave there in 1945.

Derek Cragg was just 17 and was the sole survivor of a German U-boat torpedo attack on his ship, the Monmouth Coast, as it made its way back from Sligo to Derek’s native Liverpool, during the last weeks of the second World War. The boat had a cargo of barytes ore from the mines on Ben Bulben. Sixteen crewmen were drowned. They included three Irish men.

Ian’s tone is laconic but he is clearly moved. When we get to the beach, driven by Mannie in an ancient jeep across overgrown lanes and bogs and sandhills, and Mannie points out the cave, Polchroiscreacha, he walks straight down to the edge of the sea and stands for a long time on a rock, gazing out at it, beyond the spot where a flooded stream flows over the cliffs into the waves. He’s been wanting to make this journey for years. His father died in 1975 without ever having returned to the place where his life was saved. He had gone on to marry and have four children. He died when he was 46.

“He didn’t talk a lot about it,” says Ian. “Maybe there was a bit of survivor’s guilt. Also, an older brother had been killed on active service in Tunisia in 1942. Their mother had died when he was eight. He did tell me, though, about what happened when the ship was hit. He said it lurched and tipped and went down very fast, and those of the crew who’d managed to leap clear of it were sucked down under the sea. He said he’d instinctively taken a deep breath before he was dragged down into the dark. He described opening his eyes to find himself hanging like a puppet in total blackness. He kicked and clawed and felt himself rising. The water became green and then translucent – at last he surfaced and was able to get a gulp of air. He said he heard some crying out for help, then silence.”

The exhausted boy then spotted one of the ship’s life rafts, clambered on to it and dragged a tarpaulin over his body.

Earlier this year Ian, who lives in Liverpool, came across a memorial on the pierhead to Merchant Navy seamen who died during the second World War. He put a photo of it on Facebook and mentioned his father’s story. A friend in Donegal got in touch and when he learned that Ian did not know the details of where his father was found or the names of those who rescued him, suggested he contact the Donegal Historical Society. Sean Boner, a solicitor who is in the society and is originally from Arranmore, spotted Ian’s email and got in touch. He remembered his uncle Charlie talking about the young English boy who came to his mother’s post office to send a telegram to his parents to let them know he was still alive.

Charlie Dolly Boyle was just 13 then. He is elderly now, with white hair and a walking stick, but sprightly enough still to climb the spiral staircase of Arranmore Lighthouse to give Ian a view out over the tumult of the Atlantic. Charlie was the lighthouse-keeper for 30 years and the mechanic on the lifeboat. He has seen storms that threw up waves that smashed windows in the lighthouse and bent stone walls, winds that lifted slate roofs. The Monmouth Coast went down north of Horn Head, 25 miles away, and had the northeasterly wind taken the raft into the inlet next to Bellachreesh, it would almost certainly have been smashed to pieces. “God but he was lucky,” says Charlie.

Tully McGowan also died young, at 59. Mannie remembers his father talking about the rescue. “The ones that are dead would have known everything. I can only tell what I know,” he says. “My father and Joe Phil Boyle were out beachcombing – well, they called it looking for wreckage. They had it hard on Arranmore and anything that came in was well received – planks of timber, a box of lard. There would have been steel on the raft. Anyway they rowed out to it, and when they lifted the tarpaulin there he was. My father said that the first thing he said was, ‘I knew some day I would be found.’”

Mannie says the fishermen offered the boy a cigarette, which he accepted gladly, but it turned out no one had a light.

Mannie points out the old Boyle homestead up on the mountainside. Ian was taken there to recover and it was from there that he walked down to the post office. Since making the Donegal connection Derek and his brothers have raided their attics and found a box with old papers which include the telegram he sent that day, April 26th, 1945: DEAR DAD HAVE BEEN PICKED UP AND AM ON ARRANMORE DONEGAL IN GOOD HANDS AND BEST OF HEALTH LOVE =DEREK CRAGG.

Derek’s father, Ian’s grandfather, sent a letter to the shipping company for delivery to his son: “For your pluck, courage and endurance, we are all very proud of you,” he wrote. “So hurry up and get better . . . Everybody OK here, and the war is over bar the shouting. Stuff coming up fine in the garden so when its fine you can sit out there.”

“It’s not very emotional, is it?” says Ian. “They were a stoic lot.” The box also contained Derek’s baptismal cert, which has a prayer on it: “Grant O Lord that this child may so pass through the waters of this troublesome world he may obtain everlasting life.”

Donegal had seen a lot of drama during the war, with Britain depending upon de Valera turning a blind eye to its use of the “Donegal corridor” that lay between Fermanagh and the Atlantic. The Irish sea was full of German U-boats. Quite a number of British planes crash-landed along the mountainous coastlines of Sligo, Leitrim and Donegal. Survivors were looked after, but in the months before the Monmouth Coast disaster 14 British airmen had perished in the area.

As we leave the beach, Ian asks Mannie if he can take one of the big stones home to show his children. “That’ll be €49.50,” jokes Mannie. Ian laughs. “You’re all heart!” he says. Mannie brings us to his house for tea. At his gate he has a small replica of the lighthouse with a statue of the Blessed Virgin lit up in front of it. There is a Famine soup pot in a nearby field. He tells Ian that he knows Liverpool.

“I went to Scotland at 10 and a half, came back here four and a half years later, then went to Wigan and Runcorn and from pillar to post after that,” he says. “That’s the story of the people here.”

There were more than 12,000 people on Arranmore in the 1940s. Today there are fewer than 500. As we leave to catch the ferry back to Burtonport, Mannie asks to see a photograph of the man his father rescued from the sea. Ian shows him one of the ones he has brought. Mannie looks at it, then lifts it to his lips and kisses it, before handing it back.

Easy soda bread for the ultimate cheese on toast

‘Simon Coveney asked me for a spin’: Readers on their crazy coronavirus dreams
5

'I contracted the virus, and then I lost my mum'
7

Last couple in paradise: The Covid-19 honeymooners stranded in the Maldives
9