Two sides to the art of war in Afghanistan

In 2011, Waterford-born photographic artist Jean Curran first began exploring hand-painted portraits in Afghanistan. During her research, she came across a picture that particularly caught her eye. It was of a dreamy young man in a brown suit looking thoughtfully out into the distance, beyond viewer and photographer.

“The attention to detail, the communication of the personality of the subject in the picture and their romantic quality were amazing,” says Curran. “They were unlike anything I had come across from Afghanistan before. This was someone who understood art.”

This was the genesis of From Both Sides: a collection of black and white photographic portraits of soldiers in Afghanistan that were then painted by hand by an Afghan artist. 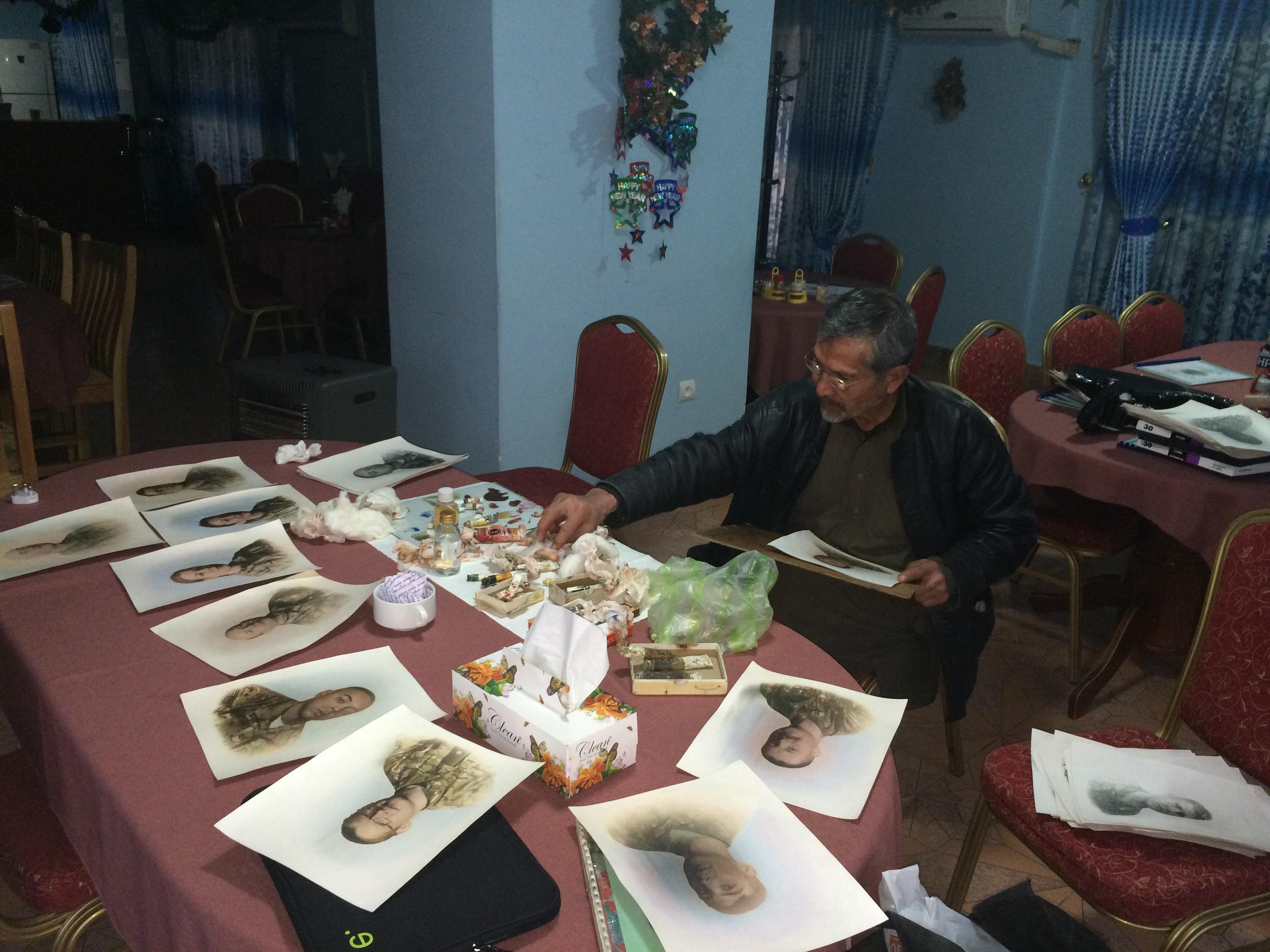 The country has a long tradition of this kind of portrait. Artists would photograph their subjects in the manner of a portrait, process the images, cover these prints in Linseed oil and then apply oil paints directly on to them with their fingertips. This tradition is part of an infinitely rich Afghan artistic heritage. However, this has largely been overshadowed by images of the military coalition.

When picturing Afghanistan, the West imagines a barren and dusty wasteland, camouflage-painted military vehicles careening across the dry choppy earth, clouds of dust, brown mud walls, khaki uniforms, death and destruction. Before this ochre canvas was stained with blood, it was painted on by its artists. With this in mind, Curran embarked on her creative pilgrimage.

“It’s hard to explain why I felt so committed to making this work,” she says. “From the moment I conceived the idea I felt it was the right thing to do. Unlike other bodies of work I have made in the past, I felt a strange connection to this idea it almost felt like it was a duty I had to fulfil.”

To Curran the plan was simple. Travel as embedded media with the military in Afghanistan, take portraits of the members of the serving militaries, print the photographs, and then have the images painted by hand by an Afghan artist. Little did Curran realise the greatest challenge she faced was gaining access to the military coalition in Afghanistan.

“As somebody who had previously worked as a photojournalist, the idea of going on media embed with the military wasn’t foreign to me. I have known others who have gone on behalf of media organisations, but wanting to go to make an art project is slightly different. Thankfully, the board of management in the US military who assign embeds really liked my idea and were enthusiastic about me making the work, as it was something completely different.”

However, it was necessary to apply for military embed alongside a media organisation. They must provide a formal letter in which they take responsibility for the repatriation of your body and for contacting your family in the event that anything should happen to you. Three years and countless failed attempts later, it seemed unlikely the project would come to fruition.

Were it not for Shane Whelan, founder of PROjekt, and his influence, these portraits may never have seen the light of day.

“Nothing ever would have happened without Shane,” says Curran. “Most people think you’re crazy for wanting to go to Afghanistan but thankfully Shane didn’t. He recognised that it was an original idea and so he supported me in making this project. With his commitment to the project others began to trust in the idea too, and through it I finally got media accreditation.”

DMG Media granted Curran a letter and she embarked on three days at the International Security Assistance Force (ISAF) headquarters in Kabul; the most dangerous headquarters in the country. Once there, she took a series of photographic portraits of members of all the different militaries.

That was in January 2015, two weeks after the intervention of the US and Nato in Afghanistan was officially declared over. The majority of these soldiers were on deployment for nine months and were tasked with dismantling outposts and stations, as well as setting up support groups and supporting the Afghan army. Curran chose to take these photographs as portraits to hark back to Afghanistan’s long tradition of portraiture.

“I wanted to recognise what was once a massive part of the Afghan culture and give it a presence in how Afghanistan is seen from the outside,” she says.

Curran then travelled to Dubai, where she spent four days in a darkroom processing the film and making the prints. Mid-air on a flight travelling back to Afghanistan, she decided to try to track down the artist of the image that had moved her so many years before. She knew only the name “Tagin Studios” at the bottom of this portrait and the name of the village where she believed the portrait had been painted. But she did not know whether the painter still lived in this village, or even if he was still alive, when she travelled to the remote city of Mazar-e-Sharif with the faint hope that she might find the artist.

She arrived in Mazar-e-Sharif and inquired with locals as to what or where Tagin Studios was, with no luck. Curran had nearly called it a day when the driver of their car told her he might know someone. He drove on for some way, stopped the car and spoke to a man sitting outside a small photography shop.

“When I first saw this man I immediately liked him,” says Curran. “He had a gentle face and I suddenly began to feel a little nervous but in a good way. Rahullah [the translator] began to tell him about me and explained why I was there. He asked if he could handpaint the photographs as we wanted and he said no problem. I wasn’t sure if he really understood what we were asking and so I took out my phone to show him the image to give him a better idea of what we envisaged and he said: “Those are my pictures.” His name is Mohammed Karim.

Karim was excited about the project and rushed off to get his dusty paints, unused for the previous 30 years. He began immediately and in two days had completed the entire set of paintings. Curran describes him as “like a child again, fast at work and deriving huge pleasure from the experience”.

Karim, born in 1954, had worked as a photographer and painter in Mazar-e-Sharif prior to the Soviet invasion of Afghanistan, in 1979. As a result of the civil war and empowerment of the Taliban, he was unable to continue his craft.

He told Curran he regretted being a painter, a skill he had acquired from his father and uncle, as trying to provide for his family and keep them safe had been difficult, and there were easier ways of earning a living in times of war.

“In times of conflict there simply is no room for art,” he said. Survival becomes the only thing that matters. He told Curran the man in the original picture was his brother, a man with a reputation in Mazar-e-Sharif as a great photographer and artist, and the face that had led Curran to Karim. He was killed by the Mujahideen 30 years earlier.

Under the rule of the Taliban, the history of art in Afghanistan was almost eradicated. This is true not only of Afghanistan but of all conflict. The first thing to suffer, the first thing from which funding is cut, the first thing deemed nonessential in times of hardship, is always the arts. And yet, this is where records of history and culture are preserved.

“Nobody cares about art and artists when their country is in deep trouble like what has been happening in Afghanistan for the past 30 years,” Karim told Curran. “Art can only progress in countries where there is economic prosperity, where there is cultural development and were people understand the value of art and artists.

“In Afghanistan, due to the war and the uncertainty, the artists, the musicians and the sculptors have all been forgotten. All of those things get lost when people are worried about taking care of their families. People think of their own survival rather than admiring art”.

This collaboration allowed the ancient technique of hand-painting photographic portraits to be brought into the spotlight through what is the most familiar representation of Afghanistan: the military. From Both Sides also aims to not only remember but rejuvenate the artistic heritage of the country.

‘I am debt-free and that feels euphoric’: The budget influencers who can help you save money
Richie Fitzgerald: ‘I often hear it said that surfing saved Bundoran’
Seán Moncrieff: What is ‘Irishness’? The answer is increasingly and wonderfully complex
Jedward are assuming their rightful roles as the people’s princes
Ross O’Carroll-Kelly: Ronan is a Republican? He’s got the names of the 1915 crew tattooed on his orm
Listen | 05:41

Meath couple whose house was due to be demolished secure temporary reprieve
Jennifer O’Connell: British media’s obsession with Meghan Markle isn’t personal, it’s existential
Science is on brink of a materials revolution
Relentless Scottish wave too much for brave Ireland at Hampden
Cost-of-living protest: Thousands turn out for Dublin march

Mistakes, regrets and inspiration: Inside the homes of Ireland’s interior designers

Autumn leave: 10 great walks to experience the glory of the season around Ireland

Ben Macintyre: ‘The Brits have been on the wrong side of history many times in the past’

I’m planning a party for a group of 18-year-olds. What’s a good drinks plan?

‘I have a hard time remembering things.’ What is brain fog and how can I treat it?

Four new films to see in cinemas this week, including a controversial Marilyn Monroe biopic

TV guide: 12 of the best new shows to watch this week, beginning tonight