Moving to the west of Ireland was meant to be a temporary stay for the writer, artist and cartographer. But, four decades later, he remains in Connemara, although his mind is setting sail for elsewhere 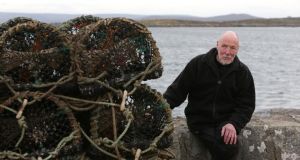 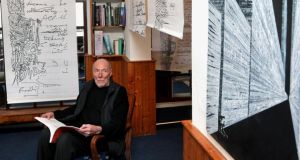 Tim Robinson is leaving Connemara. Not physically, not emotionally, but after several decades of roaming, recording and interpreting the Atlantic seascape on map and manuscript, the writer, illustrator and cartographer believes it is time to initiate a fresh relationship with “elsewhere”.

The precise location is a mystery, but he explores it in three pieces of prose he has written to accompany a photographic essay by Nicolas Fève, just published by the Royal Irish Academy.

Fève, who first encountered Robinson on his move to Ireland, in 1998, says his series of black-and-white photographs are intended to “reflect the hallmarks of Tim’s approach” – as in “the sound of the past, the language we breathe, and our frontage onto the natural world”. His juxtaposition of striking images alongside excerpts from Robinson’s work aims to “unsettle the reader and reveal the strangeness of place”, he says.

In his own brief preface Robinson recalls giving a talk at a local festival when he accidentally referred to the “second half” of his life spent on the Aran-Connemara project – a project that began with a series of maps identifying place names in Irish and continued with his books, including Stones of Aran: Pilgrimage and Labyrinth, the Connemara trilogy and his suite of essays, My Time in Space.

“A kind friend in the audience voiced the hope that this did not imply that my life was nearing its end,” he says. He “hastened to assure her that I have always expected a life of three halves”.

One of the essays was inspired by time he and his wife, Máiréad, known as M, spent in 2011 in the Irish Cultural Centre in Paris. As a mathematician Robinson was struck by the fact that every little alley has its own identity, and more than 100 streets are named after mathematicians. “What other city would do that?” he says.

The couple were in London this time when the tide rushed in, reaching a depth of 20cm or 25cm in storage space that held paintings Robinson had worked on during his time as an artist in Vienna and London.

In retrieving and rediscovering the artworks he decided to incorporate a selection in a pop-up exhibition to coincide with Culture Night, in September, and hosted in his studio in Roundstone. One part of the exhibition comprises a series of hangings depicting enlarged and highly intricate and elaborate doodles that he had the habit of creating in the left-hand margins of his handwritten literary drafts – rather like monks centuries before.

The accompanying Cities in a Vacuum series comprises geometric impressions of tall, modern buildings lining empty streets, from which monstrous forms emerge. Robinson created the images using ink on cardboard, applying the base of a matchbox to create a distinct linear effect. He wanted to develop the idea of “cities so perfect that people could only bear to live in sewers”.

“We were living in Vienna in the early 1960s, and it was a very sinister time, when people really didn’t want to talk about what had happened, because so many had been compromised in one way or another by the Nazis or the Russians during the second World War. So we really didn’t know our neighbours at all.

“The Viennese monsters were a passing phase,” he says, taking out several examples of large, abstract paintings that he completed in London when the couple moved there, in the 1970s. The Yorkshireman, who had won a scholarship to Cambridge to study physics and mathematics, and then taught both subjects at an American college in Turkey, says that his experiences in Istanbul, and subsequently in Vienna and London, were all one associated part of his “first phase”.

Art had been his passion in Turkey in the evenings after teaching, but he and Máiréad then moved to Vienna to pursue it full time. There he painted under his mother’s Shetland Island surname, Drever. After three years the couple relocated to London, where he worked as a subeditor and technical illustrator to subsidise his work for various exhibitions.

“I went for long walks in London and occasionally picked up a little washer, or button, and later glued it to a wall of my studio, where sometimes a visitor might notice it with a start, and I’d know that a moment had been salvaged out of the onrush of time,” Robinson says.

In his transition to his “third half” he is drawn to what he describes as a “compulsion to form”. So, in his first essay, Where Are the Nows of Yesteryear? , seven or eight long paragraphs begin and end with the word “now”. Similarly, in working on his second essay, The Tower of Silence, he would transform a “seemingly meaningless phrase” into an image of a tower that “always stands in a city somewhere”. Each tower has a common thread; stepping outside it, one always witnesses “an incidence of cruelty, neglect or misfortune”.

So, in the first such tower, a young man strips a Victorian house of its woodwork, heads for Kathmandu and leaves behind a volume that appears to be the works of a “Buddhist sage” – but is nothing but a cover for a ripped-out text. On opening it, with great anticipation, the writer finds that “the word of God is gone, and what we are left with is a dry husk of analysis and exegesis”.

“It is as if to say, where are all the gods gone? . . Not that I believed there ever were any gods . . . but we thought they were there,” says Robinson.

Is he pessimistic? “I remember a friend of ours saying that physiologically he was an optimist and intellectually a pessimist,” he says, laughing. Three years ago, during his time as a visiting fellow at Cambridge University, he delivered the Parnell lecture on the theme of “a land without short cuts”.

“It was partly a defence of the land and also noting how much is lost if a land is invaded by wind turbines – even just one,” he says. “Global warming is a reality we’ve got to do something about, but it has to be done in a way of economising our use of resources.” Robinson makes nothing of it but confirms that he and his wife live with neither central heating nor a car.

It is as if, as he approaches his 80th year, Robinson is drawn from the micro- to the macroscopic at a time when most of his peers might be moving in the opposite direction. “My work before was a study of the individual’s relationship to the landscape,” he says. “Now I really want to write about the material individual’s relationship to the rest of the universe, so I am beginning to do this, not systematically but almost following an arbitrary initial set of words.”

So Robinson has cleared his head by clearing his shelves, donating thousands of notebooks, drafts, manuscripts and books to NUI Galway, which is hosting an exhibition drawn from the extensive archive.

“There’s lots more to be said about Connemara, but not by me,” he says. Not quite: Robinson recalls that he learned only the day before of the name of a big rock out the bog road – “policeman’s rock, or cloch na bpeelers” – from a neighbour. The same neighbour also recited, as Gaeilge, the 10 names of cattle that the fairies once owned. Robinson found himself scrabbling for a piece of paper to write the list down.