Dogs have an eye muscle that lets them give you that look. We helped them acquire it 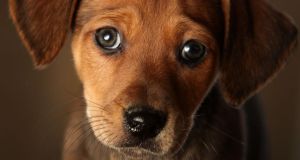 Puppy dog eyes: the research finding is ‘another piece of the puzzle of what connects dogs to people’. Photograph: Christopher Furlong/Getty

You know that face your dog makes, the one that’s a little bit quizzical, maybe a bit sad, a bit anticipatory, with the eyebrows slanted? Sometimes you think it says, “Don’t be sad. I can help.” Other times it quite clearly asks, “No ham for me?”

Scientists have not yet been able to translate the look, but they have given it a very serious label: “AU101: inner eyebrow raise”. And a team of evolutionary psychologists and anatomists have reported that dogs make this face more often and way more intensely than wolves. In fact dogs, but not wolves, have a specific muscle that helps raise those brows.

An example of the look can be found in a talking-dog video that nearly 200 million people have watched online. The dog in the video can twitch its inner eyebrow because it has a muscle called the levator anguli oculi medialis. It can talk because it’s a YouTube video. That part has nothing to do with science. But it hardly needs the voiceover to make its emotional point.

There were studies on how dogs look to their owners when they can’t solve a problem, and evidence that dogs who indulged more in ‘AU101: inner eyebrow raise’ were more likely to get adopted from shelters

“I think the study is compelling,” says Clive Wynne, a psychologist who heads the Canine Science Collaboratory at Arizona State University. It is, he says, “another piece of the puzzle of what connects dogs to people.”

How humans and other animals communicate by looking at each other is a matter of great interest to scientists. Anne Burrows, an anatomist at Duquesne University in Pittsburgh, studied chimpanzee faces. She and other researchers, including Juliane Kaminski, an evolutionary psychologist at the University of Portsmouth, in England, joined together a few years ago to look at domestic animal facial expressions and musculature.

They started with horses and cats, and, she says, horses have facial movements similar to dogs’, but cats do not. “It turned out they just don’t really move their faces at all.” The researchers did not explain how cats are nonetheless able to express highly sophisticated states of mind, such as scepticism, disdain, deep self-satisfaction and world-weary ennui. That research may have to be left to the cats themselves.

Dogs were an obvious subject. As many dog owners have said, “Just look at that face!” There were studies on how dogs look to their owners when they can’t solve a problem, and evidence that dogs who indulged more in “AU101: inner eyebrow raise” were more likely to get adopted from shelters.

So the team tested dog and wolf behaviour by videotaping their reactions, and, as expected, dogs did raise their eyebrows more often and more intensely than wolves. Even though wolves don’t have that muscle, they have a lot of other muscles, so they can do a bit of the look.

Researchers dissected the heads of four wolves and six dogs, all of which they acquired after deaths in which they had no part. As might be expected from animals so closely related, all the musculature was exactly alike except for the levator muscle, which none of the wolves had. One other muscle, which varied in the wolves and dogs, was also related to eye movement.

The scientists hypothesise that humans have unconsciously favoured eyebrow-raising dogs during fairly recent selective breeding. Burrows says that one tantalising hint that could lead to future study was that one of the dogs, a Siberian husky, was more like the wolves and did not have the levator anguli oculi medialis.

Huskies are more closely related to wolves than some other breeds are, and it could also be that talent in sledge-pulling was more important than a soulful face in the breed’s development.

”The next step is to look at more breeds,” Kaminski says, to see if the behaviour and the musculature vary. Perhaps dogs that are bred to work very closely with humans might be more likely to show the raised eyebrows that seem to indicate the dog is paying attention.

And, she says, she would want to know whether the upbringing of a dog has an effect on this behaviour.

As for what the meaning of the look is in the mind of the dog that gives it, and what dogs think of such studies of their facial expressions, science doesn’t have those answers yet.

And although animals might close one eye, and despite the vast amount of evidence on the internet, there is no scientific evidence that dogs, or any other animals, wink. – New York Times