The Yes Woman: can Bewley’s convert me to coffee?

I’ve never liked coffee, but maybe training as a barista can change all that 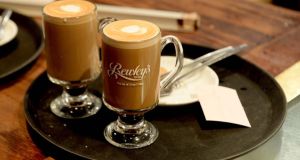 On a visit to Bewley’s factory this week, I didn’t have the heart to tell anyone there that I’m not overly fond of coffee. In fact, I’ve always quite disliked it. That’s possibly because many people seem to use it as a sort of crutch, and I have a discomfort with the idea of “needing” something non-essential rather than just wanting or enjoying it.

Often when I think of coffee drinkers, it conjures an image of those people you observe from a bus window at half past eight in the morning, smoking on the freezing street and holding a paper cup containing nine shots of espresso in their juddering hands. As the bus crawls by in rush-hour traffic, I consider the wording of the condolence letter I’d like to write to their internal organs, and then wonder what motivates them to try and disable their tastebuds before the day has even begun.

Then there’s that other sort of coffee drinker, that friend of a friend who spends every weekend “grinding his own beans” (not a euphemism) while wearing hemp sandals and a disdainful expression. These people afford “good” coffee an eye-watering objectivity, when really it’s one of the most comfortably relative “facts” in existence.

Saying “coffee is tasty” is either true or untrue in equal measure according to whoever is making the statement, and it really doesn’t go beyond that. Certainly, there are tastes that many may agree are not very nice, such as rancid coffee, but I’m sure that someone somewhere considers even that quite acceptable. The cross-addicted pre-9am smokers probably wouldn’t say no.

Anyway, I head to the Bewley’s factory to undertake some barista training. It is, after all, entirely possible I have only been exposed to “bad coffee” before. Rather childishly, I find the whirring of the grinder and the clicky sounds of the coffee machine’s great apparatus rather thrilling.

There’s something soothingly ritualistic about the movements of baristas as they turn their backs, complete a few fluid movements to a symphony of noise, and then return to you holding a glass full of some sophisticatedly frothy affair, its varying brown hues undulating like a Guinness settling down to rest.

They really take their coffee seriously at Bewley’s. There are tasting rooms and little kitchens for testing and brewing. In the factory, there are stations for quality-testing each batch before and after they accept new shipments of beans, and then at break time the staff go into the cafeteria and actually drink coffee.

They drink it despite the fact the reception and halls smell of coffee. Everywhere smells of coffee, and so does everyone you meet. It appears to be akin to working in a chip shop, only when you go home smelling of chips after a long day, you make yourself chips for dinner.

A very senior staff member comes over to the barista training room, where Maria Cassidy, head of training, is teaching me how to make a latte while I surreptitiously try to wipe coffee from my apron, to ask Maria for . . . a cup of coffee.

Maria shows me how to make an espresso, and when we taste it, it is genuinely better than any I have had before. It still tastes of coffee, which I like far less than a nice cup of tea, but it has no unpleasant tang.

Then, Maria has me make another espresso using the same coffee. We don’t add the recommended amount of coffee, we don’t tamp it down well, and when we taste it, it is tart enough to hurt your face. This is enlightening.

Afterwards, we try some latte art, which is the impressive practice of creating a (preferably nice) image with foamed milk on top of your coffee. It is done freehand and very quickly, just by pouring milk from a jug.

Maria produces an elegant feather. Mine looks rather more like a misshapen egg. She tells me it is a good try, with the kindly expression of someone dealing with incompetence but being really good about it.

The Yes Woman says yes to . . . a nice cup of tea, and no to . . . ingesting enough caffeine to hear colours

London Fashion Week: Paul Costelloe back in form with a little help from his son
6

London Fashion Week: Tommy Hilfiger and Lewis Hamilton show unlike anything else
8