The very Irish tale of Ralph Lauren’s niece in court 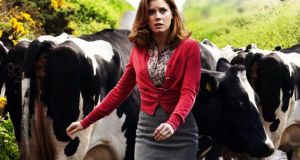 There is something cheesy-US-romcom-in-waiting about the case, worthy of a sequel to Leap Year, above

Forget shooting pigeons for food and endless reports on ghost estates: let’s just hope the American media doesn’t cop on to the most Irish news story of all time – the arrest of Ralph Lauren’s niece, Jenny Lauren, in Ireland after an alleged air-rage incident.

Not to play down the seriousness of a flight being diverted, and Jenny Lauren being charged with being intoxicated and breaching the peace, but there is something classically cheesy-US-romcom-in-waiting about the case, worthy of a sequel to Leap Year.

Given the absence of a courtroom, the initial details of Lauren’s case were heard in the local Brian Boru pub in Ballina, the makeshift Killaloe District Court. What better place for someone charged with intoxication than down the boozer.

The Daily Mail detailed the court scene: “Ms Lauren sat only feet away from Guinness and Heineken taps and under switched-off disco lights.”

Generally, visiting high-profile Americans are escorted to places such as the Brian Boru and have Guinness forced upon them. But yesterday, the licensed premises was clearly not in operation as a pub. Garda Yvette Walsh said that when Lauren was detained at Shannon Airport, she asked officers: “Can you say that in English please?”

Lauren heads up a successful jewellery business, and was on a flight from Barcelona to New York when the pilot decided to divert to Shannon. Personally, I’m looking forward to the conclusion of this news story, when Lauren falls in love with a local garda, played by Pierce Brosnan, against the advice of the local fortune teller, played by Brenda Fricker.

Or maybe it’s all guerrilla marketing for The Gathering 2014? As our friends across the water say, man, you gotta love Ireland sometimes.

Michael Harding: I sat alone in my room, even though I wasn’t in isolation
10