The Times We Lived In

Compose your own ode to old Parnell Square 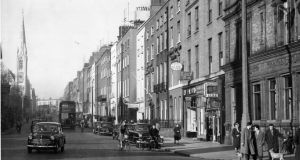 T he area around Parnell Street has become emblematic of the changes wrought by time on our capital city. It was the sight of its thriving ethnic hairdressers and restaurants which led many of us to realise the world had come to Dublin and was living here, happily getting on with its daily life, whether we knew it or not.

It does us good to take a fresh look at our urban surroundings every so often. It’s easier said than done, though. Happily help is at hand from the One City One Book selection for 2014, If Ever You Go . Edited by Gerry Smyth and Pat Boran and published by Dedalus Press, this generous fistful of poems about the city wanders the streets, peering through windows, visiting galleries and monuments and shops and – every so often, when it just can’t help itself - breaking into song.

It was a particularly evocative poem by Mark Granier which reminded me of the archive cityscapes we sometimes feature in this column. Entitled A Photograph of Fade Street, Dublin, 1878 , it begins “The exposure, half a minute? Enough for light’s breath/to cloud the glass . . . .” and goes on to talk about “the pair of women who stand talking with a third” and “children who whirr, sparrow across the street”.

Readers are invited to compose their own poem on the subject of this lively 1955 study of Parnell Square East. The street signs are a poem in themselves – a kind of litany of Dublin life at the time: Forte’s Snacks and Ices, Hawkins’ Tailors, The Anchor Hotel and, just visible to the right of the bus, the iconic Ierne Ballroom.

And then there are the people. The man wheeling his bike, looking very serious; the woman freewheeling down the hill to his left. On the pavement, another woman raises her hand to her head, perhaps smoothing her hair after a gust of wind. And look at that group of men with the dogs at the bottom right of the scene. Dwarfed by an enormous lamppost, two of them are squaring up to each other in what must, surely, be an explosive moment. Poem? Sure it’s an entire song cycle.
Arminta Wallace


Images from The Irish Times can be purchased from:
irishtimes.com/photosales