The Sawdoctors: Rhyming ass with mass was a beaut ... it’s about glorifying the mundane

The Galway band discuss reuniting, I Useta Lover and keeping it local on the Róisín Meets podcast

The Sawdoctors perform Everyday, their 1996 song about a girl from rural Ireland who travels to England for an abortion, during an Irish Times podcast with Roisin Ingle. 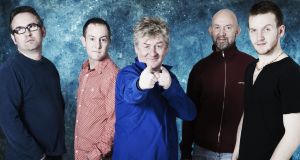 The Sawdoctors knew their hit song I Useta Lover would be a keeper when they decided that the protagonist would be watching a woman in church as he admired her beauty.

“Glorifying the mundane,” has always been their strong point they explained, and according to fellow Sawdoctor singer Leo Moran they have always found when it comes to lyrics, “the more local and honest you can be, the more people like it.”

“There’s still nobody doing what we’re doing,” Moran added. “I think that’s why people want to see us again, because nobody else wants to be like us,” .

After a three-year hiatus, Moran is in the rehearsal room with his old bandmate Carton once again and they are ready to get back on the road.

They are touring the country between now and Christmas, including three sold-out shows at Dublin’s Olympia Theatre and hope to take their reunion to the U.S. next year.

Their songs have always struck a chord with Irish audiences, sometimes even to their own surprise.

“I remember thinking people are going to think we’re awful stupid singing about the Galway road, so we had it in our pocket for a while,” said Leo about their song N17, which launched their careers.

The one that really made them however, was I Useta Lover, which topped the Irish charts for nine consecutive weeks.

In 1996, The Saw Doctors included the song Everyday on their album, Same Oul’ Town. It did not get much attention at the time, telling the story of an Irish woman taking the boat to England for an abortion.

Everyone knew someone who had been in that situation but, “people didn’t talk about it,” said Davy.

’Everyday’ was their attempt at being, “sympathetic in some way to people who have very difficult decisions to make,” said Leo, and while things have not really improved for Irish women since they wrote the song, at least there are signs of progress.

“It’s amazing how things change so slowly. But there seems to be a lot more sensible and reasonable dialogue at the moment and I think there is progress in that way,” he said.

For the full conversation and to hear The Saw Doctors play Everyday, I Useta Lover, N17, and more, go to Soundcloud, iTunes, Stitcher and irishtimes.com.

The Saw Doctors’ Irish Tour kicks off on 29th October at the Spiegeltent in Wexford. For more dates go to sawdoctors.com