The personal is political: my family’s childcare role-reversal 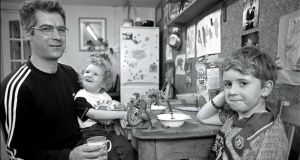 Kevin Webster at home in Dolphin’s Barn, Dublin, in 1995 with his sons Naoise McTeirnan and Finbarr McTeirnan. Photograph: Derek Speirs

I love slogans, and “the personal is political” is possibly my favourite. No one knows who coined it but it has been embedded in my family’s heads for the past two decades as we tried a calculated experiment to subvert the social and gender norms we inherited.

Not for us a stay-at-home mother prone to outbreaks of baking and bathos and a thrusting, briefcase-carrying, disciplinarian dad. We were going to do things differently. And we did. Sort of.

In 1995, just as our second son reached 18 months, a job came up in the sports department at The Irish Times. I was a freelance journalist, and this was a full-time, permanent, pensionable job, previously occupied only by men. I got it.

Swap roles
So we decided to swap roles. I was to be the main wage earner, Kevin was to go part-time and do the bulk of the childcare.

Last week, son number two explained his parents’ decision as logical because his dad, as a social worker, had the far more stressful job helping children. Mum, on the other hand, only had the soccer results to worry about. It was a no-brainer for the one whose job demanded more to do less. He had a point.

At the heart of the juggling act was a belief we shared that men should have an opportunity to be present in the home and in their kids’ lives and that women should have a shot at doing work outside the home with all the financial, personal and social benefits that can bring.

The perfect solution would have been an exact split between the two of us: employment and caring in equal measure. What we did was the nearest we could get.

Did I miss out on time with my children? Some time, sometimes. They are still talking to me, if that’s any measure of the success. Did Kevin miss out on career opportunities? Not long-term. He has just returned to the workforce full-time with enthusiasm and experience.

A quick survey of the recipients of our alternative parenting endeavours elicited the following response from our elder son: “It never felt different to me because as far as I was aware at that age it wasn’t different.

Good job
“I am aware now though that most people might be used to their mother being more involved in childcare, but I still can’t say if I would have preferred it the other way around. I feel that dad did a good job at looking after me and that I turned out reasonably well.”

I asked him if he thought that, being a woman, I might have done a better job at parenting. “I don’t believe it is more likely you would have. It depends on the type of parent, I suppose, not the gender of the parent,” he said.

Not sure how I come out of that, but I have always encouraged him to speak his mind.

So there you have it. Our little personal political experiment. And it is little. But it is also significant. Every time anyone explores a different way of doing things, they point up the intransigence of the existing system. Some may perceive that as a threat.

Many men are hoodwinked by a social and economic system that cods them that they have all the power to make all the choices and yet denies them the fundamental option of building the best relationships they can with their children.

On the other hand, many women have been hoodwinked by a society that pays lip-service to valuing the work of women in the home, but in reality places no value on it whatsoever.

What myself and Kevin did by shifting traditional gender roles has been an interesting personal experiment. In an ideal world, the man looking after the kids would have had no novelty value at all. But 17 years after we began, the man being the main care-giver in a family is still unusual.

Men and women are perpetually sucked in and spat out of the economic system as and when that system pleases. But even business and establishment stalwarts, such as online media mogul Arianna Huffington, are beginning to see the error of their ways. “Let’s get behind the façade of a successful life, the magazine ideal of having it all together — the job, the kids and husband — and ask what price are we paying, and what are we leaving unattended?”

I have nothing in common with Arianna Huffington apart from an initial and a Greek name, but I did find myself in agreement with her view of Facebook chief Sheryl Sandberg’s Bible for busy boardroom women, Lean In. Huffington wrote: “We need to ask ourselves, what is the nature of the world women are leaning in to?”

The world of work is definitely changing for women. It is getting harder with longer hours, less pay and far less stability.

For me, the social experiment is almost over — bar one final Leaving Cert — and I’m off to contemplate my future.

Unlike Sandberg, however, I don’t think I’ll lean in. I’ll probably just lie down.