The life of an anti-prostitution campaigner

Northern Ireland is about to criminalise those who pay for sex. This legal breakthrough has come at huge personal cost to a former prostitute who campaigned for it 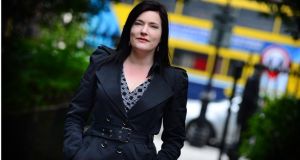 Rachel Moran is the author of ‘Paid For: My Journey Through Prostitution’. Photograph: Bryan O’Brien

New legislation will be enacted in Northern Ireland on Monday, criminalising those who pay for sex. I was in prostitution for seven years and have been among the campaigners for that legislation and for similar legal provisions here in the Republic. Last November Justice Minister Frances Fitzgerald announced her intentions to enact similar legislation. It has been a hard-won campaign.

Part of the difficulty of being involved is the campaign has been the relentlessly abusive treatment I have received at the hands of our political opponents. When I began blogging about my experiences in the Irish sex trade I started receiving abusive messages and was lied about publicly from the very start.

First, it was claimed that I did not exist; that my writings were penned by bible-thumping sex-trade abolitionists who’d never seen the inside of a brothel.

In 2012 I spoke in the Department of Justice in full view of dozens of people who had contended I didn’t exist; that particular lie was impossible to peddle from then on. It was then claimed that I did exist, but was a fake, a fraud and a fantasist. I had come up in the world! Abuse continued to arrive into my blog daily, but now was more vicious, personal and threatening.

In April 2013, my book Paid For, detailing my experience of prostitution, was published, and with it my identity. I had no way of protecting myself against the lies that were told online about me.

I had to trust in people’s common sense and hoped it was clear that no mentally stable woman would publicly contend she’d been in prostitution if she hadn’t. But to know that your character is being taken daily, that you cannot protect yourself against it, and that the best you can do is trust to the judgment of strangers places a person in an extraordinarily vulnerable position. There has been no let-up.

In fact, every legal milestone myself and the many other women globally who are fighting for this legislation achieve, we must pay for by becoming victims of an organised campaign of abuse and intimidation.

Those campaigning against the laws I’m fighting for have got hold of my home address, bank details and personal email. Now the abuse lands straight into my inbox as well as my blog, and I have had portions of my home address tweeted at me in a “we know where to find you”-style threat.

The psychology of this online abuse is parallel to the abuse of prostitution in one sense: an eerily similar “keep your mouth shut” directive is at play here.

I am writing this article because it is time the Irish public knew how those of us who’ve lived the demeaning, degrading reality of the sex-trade are treated when we have the nerve to speak out against it. Prostitution is simply a system of compensated sexual abuse, and those of us who have lived it have not only a right, but an obligation to say so.

Far from the “happy hooker” narrative, the reality is the vast majority of women and girls in the brothels and the red light zones are there because they have been harmed through previous life experiences beyond their control, like poverty, educational disadvantage and childhood sexual abuse.

Women do not want the intimate orifices of our bodies as open to the public as any bus or train station, and it still amazes me that we actually have to make that point, when I know full-well that those reading this wouldn’t want that for the females in their lives, regardless of their views on what’s good enough for “other” women.

On the subject of women, let me make one important point: the majority of women in prostitution were not women when they first got there. All of the seven girls on my corner were in their teens, almost all of us, including myself, under the age of consent.

I was 15 when I started in prostitution, after 18 months of state care interspersed with periods of homelessness. We young girls were much in demand by the sex-buying men of Ireland. The concept of “fresh meat” is nowhere more in evidence than in prostitution.

What we are campaigning for is the criminalisation of the demand for paid sexual access to people’s bodies, the decriminalisation of the sexually exploited, and the provision of exit strategies including education and training so that prostituted people can move forward and rebuild their lives.

As for the minority of women who say they are content to be in prostitution; these laws would decriminalise them. So why do some of them try to block the exit strategies we’re campaigning for?

There is another group of women few remark on in this debate: the wives and partners of sex-buying men. The vast majority of these men are married or have long-term partners, yet in this debate these women and their children scarcely merit a mention. What kind of devastation do people think it causes to families when a mother discovers that her children’s father has been using women in prostitution?

That consideration was far from my mind when I was in prostitution but women’s attitudes towards prostitution are markedly different depending on whether they are currently embroiled in prostitution or have managed to escape it.

The truth that I am free to face today is that prostitution is deeply damaging to families, to men and particularly to women. It is destructive to the concept of gender equality especially and to society as a whole. As the US psychologist Melissa Farley, founder and director of Prostitution Research and Education, has remarked: “Prostitution is to society what incest is to the family.” Having lived through prostitution, I have a deep understanding of the wisdom of those words.

As for the abuse women such as me receive from those invested in keeping the sex-trade going, I am well aware that there will be no end to it. After we’ve achieved this legislation in the Republic, the abuse will not recede; it will increase, just as it increased for the Canadian women I organise with after they got their legislation.

It is a heavy price to pay, being routinely reminded that you and your children are unsafe in your own home, but it will be worth it if it means making the purchase of sexual access to human bodies illegal in our country, and dramatically reducing the social incest that infects it.

Rachel Moran is the author of Paid For: My Journey Through Prostitution, published by Gill & Macmillan; @RachelRMoran