‘The joke is on Ross and people like Ross’

Journalist, author and Ross O’Carroll Kelly creator Paul Howard talks about his new book, his columns and his sense of humour

Irish Times columnist Ross O’Carroll-Kelly is being honoured with his own ‘walk of fame’ in a series of plaques commemorating landmark moments in his life including one outside The Irish Times building on Tara Street. 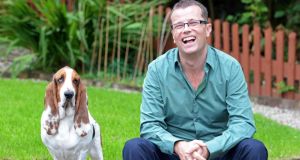 ‘I sit at a desk thinking in the voice of an idiot for ten hours a day,” says Paul Howard. “That’s my job. Imagine driving home every evening with that voice in your head?”

We are in the sitting room of the Avoca house where Howard works. He commutes here every morning from Stillorgan, where he lives. In the tidy back garden there’s a statue of a pig and some decking overlooking a stream. “God, don’t tell anyone I have decking,” he says.

Next door is the book-lined office “where the magic happens” and licking my cup of coffee is a large basset hound called Humphrey who has one blue and one brown eye. “He has ‘Bowie-eyes,” says Howard.

The very funny new Ross O’Carroll Kelly book, Keeping up with the Kalashnikovs, is just out. It is the 14th Ross book and there will be at least two more. After that, Howard can’t say what will happen with Ross. “Since I wrote the first Ross book people have asked me when I’m going to stop,” he says.

Howard’s Irish family moved from Luton to Dublin when Howard was eight.

“My dad said: ‘If Margaret Thatcher came to power we’re moving to Ireland’ and four weeks later we did. He hates politics. He doesn’t vote. He has seen enough to know they are all the same. But he worked in factories and knew that Thatcher getting into power wasn’t good news for people like us.”

The family arrived in Ireland just in time for the Pope’s visit and the worst years of the Troubles “I remember walking through Sallynoggin and seeing this eight -foot wall with ‘Brits out’ and ‘Smash H Block’ and things like that. It was a great incentive to lose my English accent.”

It gave him an outsider’s perspective, he says. “I didn’t even know there was an Irish language . . . Ireland seemed completely foreign.”

“When I became chief sportswriter at the Tribune I thought ‘this is me now. I’m happy.’”

The original Ross O’Carroll Kelly columns were inspired by what he saw when covering school rugby matches.

“Rugby didn’t really engage me, but what was happening around it did – the idea that you would get 4,000 people at a schools game . . . the jocks who were heroes among their peer group and the rich dads and the Senior Cup Mothers, these rich ladies wearing clobber from Pia Bang and Pamela Scott. I didn’t know anyone that posh growing up.”*

The columns, which lampooned the privately educated scions of South Dublin, were originally a lot “harder edged”, says Howard. “I was carrying a lot of chips on my shoulder about class. In Dublin in the 1980s there was very much a dividing line between working class, middle class and upper class people . . . I remember walking home with my brother after swimming in the Forty Foot and we took a shortcut through a posh estate and the guards arrived and stopped us, made us stand by the side of the road and questioned us about where we were from and what we were doing in this estate. I remember being very chippy . . . . I think it was clear [in the early books] that I hated Ross.” But that changed. “To write about a character for so long you have to have sympathy for him.”

The Ross books are still based on the comic notion of “a city divided” he says, and his favourite scenes involve Ross being “out of his depth from a class point of view”. “When I write people’s accents phonetically, I am conscious that the joke isn’t on the people Ross is talking about, the joke is on Ross and people like Ross, who when he’s talking to an ordinary person from, for instance, Ballybrack, hears ‘Ah, me jewel and darlin’ Dublin’. He goes into this dream world. These people are from four miles up the road from him and he just can’t relate.”

The insanity of the boom was a gift for Howard as a comic writer.

“It was absurd and I couldn’t understand why other people didn’t think it was absurd,” he says. “I called to a friend’s house in around 2001 and he brings me out to the back garden in a council house in Ballybrack and there’s a massive hot tub for eight people in the garden and his mum and dad were in the hot tub ‘Are you hopping in?’” He laughs.

“But everyone has their Celtic Tiger guilt stories. Mine is that I put on a pair of trousers I hadn’t worn in a year and I found €500 in the pocket. I hated myself for that. I thought of seeing my dad working nightshifts to put us through school. It really bothered me.”

His own sense of humour comes from PG Wodehouse, classic English sitcoms and his family.

“My mum died ten years ago but she was very, very funny. She could find humour in everything, especially dark places. My dad is hilarious. I grew up in a house of four boys. Nobody had any secrets. Nothing was considered out of bounds for slagging.

“ We go back to our dad’s every Sunday for dinner and our wives and girlfriends sometimes sit there open-mouthed at the things we say. You might have a nice shirt but you think ‘I can’t wear that to my dad’s house because I’ll be totally destroyed’. You’re better taking it off and leaving it in the car”

He doesn’t always like to exploit easy laughs. Ross doesn’t say ‘roysh’ so much anymore. “It used to be this linguistic crutch that appeared every fourth sentence, but I kind of stopped using it because it became a catchphrase. People started shouting ‘roysh’ at me and there were some ads on radio doing an approximation of the Ross accent and they’d always put in a ‘roysh’. So I stopped having Ross say ‘roysh.’ I didn’t like it being the only thing people remembered.”

Rhino What You Did Last Summer

“I never expected to be writing a comeuppance story for Ross and his people as quickly as I was. I kind of thought, maybe in 20 years time there might be a big land for Ross and his friends but I didn’t think it was going to happen within the lifetime of the series.”

So the Ross books incidentally document the rise and fall, and possible rise again, of the Celtic Tiger (“Celtic Phoenix” if you listen to Ross’s dad or some real life irony-free headline writers). Howard relishes the ephemeral details the books collect. “It’s almost like a social archaeology of the past. The shops and nightclubs and catchphrases that you forget about.”

Some of his favourite writers are people like Damon Runyon and George McDonald Fraser (author of the Flashman books) whose work has journalism at its core. He reads widely. The new book was, believe it or not, partly informed by the memoir of Judith Tebbutt who spent six months as a hostage in Somalia. He still sees what he does as an extension of his journalistic work. “I never had any ambition to be a novelist,” he says. “I kind of balk when people call me that.”

He’s at his desk from 8 until 6 every day and he likes to manage four or five projects at a time. He wrote Anglo the Musical and Triggs, the autobiography of Roy Keane’s dog (“Humphrey came in useful for that”). He writes for Irish Pictorial Weekly and the Mario Rosenstock Show. He is currently writing a biography of Tara Browne, the aristocrat, socialite and friend of the Beatles, as well as a sitcom he “can’t really talk about”, a weekly column for this paper, a “Billy-Elliot-type movie” about a cricket-obsessed boy and an Abbey play based on the Donoughmore kidnapping (“It’s a Stockholm syndrome story,” he says).

And of course there’s Ross O’Carroll Kelly books. The current book is very funny and also quite dark, with its closing chapters set in an impoverished warzone (hence the Judith Tebbutt biography).

“I’m not afraid of darkness,” says Howard. “There have always been dark moments in the Ross books.” Ross can withstand it. He’s a cultural icon. There’s a plaque to him in Kielys pub now (and one for Ross outside The Irish Times as publicity for this latest book). The type of people who were formerly wary, now petition Howard for mentions in the columns (“It would be unfair to say who”). Is it hard to switch Ross off? “There was a year when I was writing the books and I was writing sport for the Tribune and ghost-writing George Hook’s autobiography at the same time, and a number of times I found myself writing ‘roysh’ in George Hook’s book.” He laughs. “I’m always looking at things through Ross’s eyes. I’m always wondering: ‘What would Ross think of that?’”