The Jameson sisters: inside the home of Ireland's whiskey dynasty

The three Jameson sisters, Kristin, Andrea and Tara, are the ninth generation direct descendants of John Jameson, whose name is synonymous with Irish whiskey. Home is a rambling mansion in Co Waterford 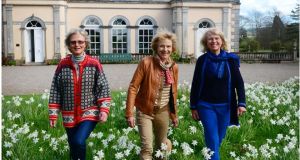 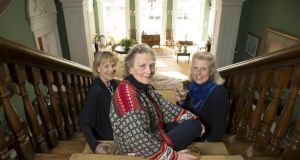 The Jameson sisters on the staircase at Tourin House. Photograph: Patrick Browne 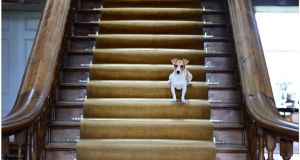 "Whiskey gets rid of ticks off dogs,” Andrea Jameson confides, as she pours tea in the informal sitting room of her family home, Tourin House, near Cappoquin in Co Waterford. There is a second, formal sitting room, with dramatic red walls, china cabinets that look like they could be in the Victoria and Albert Museum, and an enormous, delicate, beautiful chandelier that resembles spun sugar.

“But we prefer this room, because it’s warmer,” Kristin Jameson explains, gesturing towards the wood-burning stove that is swallowing some of the chilly air in their vast “informal” sitting room. You could hoist sails on a boat in this room, and they would touch neither walls nor ceiling. “It’s cosier,” agrees Tara Jameson.

The three Jameson sisters, Kristin, Andrea and Tara, are the ninth generation direct descendants of John Jameson, whose name is now synonymous with Irish whiskey. Their father, Shane Jameson, who was born in Tourin House in 1924, was the last named non-executive director of Jameson’s, from 1963-1988. The sisters grew up knowing things about whiskey which most people would not, including the fact that it makes ticks fall off dogs.

Kristin, Andrea and Tara’s grandfather, Thomas “To” Jameson came to live at Tourin House when he married Joan Musgrave. The Italianate-style house was built in 1840 by the Musgraves, although the tower house on the land, which is visible from the informal sitting room, dates from 1780.

Their father Shane, and his brother Julian, grew up here, alongside many other family members. “When Daddy was a child, there were three generations living in the house, plus an aunt and uncle who sort of turned up and stayed, and a few others floating around,” Kristin says. “There were 12 staff working in the house then, and 12 in the gardens.” Today there are two staff members employed at Tourin, one in the house, and one in the gardens, both of whom the sisters consider to be part of their family.

Of the siblings, Kristin is the eldest, with Andrea and Tara following in age. Kristin and Andrea returned to live here almost a quarter century ago, and have remained ever since. Tara is married, and lives in Waterville, Co Kerry, although when the house and gardens are open to the public, she spends most of her time at Tourin.

Of the three, Kristin looks remarkably Nordic, which is unsurprising, as their mother, Thora-Merete “Didi” Wiborg, was Norwegian. “She met Daddy on a golf course in Oslo in 1949; the one and only golf course in Oslo,” Andrea says.

When Didi came to live at Tourin, she brought with her two wood-burning stoves, then a novelty in Ireland, and a Norwegian-built rowing boat. “She wouldn’t go out on the Blackwater in anything else,” Kristin says.

Their mother planted the trees, shrubs and flowers – many of them rare species - that made the Tourin gardens famous. She also did tapestry. The cushions and chair-backs she worked in intricate needlepoint are still in use in the house today, and are some of the items affectionately pointed out to visitors by the sisters when they give tours. Their father farmed the land, started a grass-drying factory for making grass meal for fodder, and then moved into dairying.

“Every two weeks he went up to Dublin and spent four or five days there, at meetings about Jameson’s,” Tara says. As the sisters recount it, sales of whiskey to the US, which was a key consumer, had failed to recover significantly after Prohibition, and the poor economy that followed after the second World War.

“When the economy started recovering in the late 1960s, the distilleries in Ireland realised they needed to rebuild and renew themselves,” Kristin says. “In 1966, the directors of John Power and son, the directors of John Jameson and son and the Cork Distillery Company, met in secret in the dining room here at Tourin.”

“I can remember serving them at dinner in my little white socks,” Tara recalls.

“The outcome of the meeting was the Irish Distillers Group was formed,” says Kristin. “From then on, sales started to grow again. The landmark was in 1994, when they had sold over 100 million cases.”

“It was just before Daddy died,” Andrea says. “He was so proud.”

Their mother was already dead by the time their father died, so in 1994, they had to decide what to do with the 360 acre estate and family house. “All three of us said we’d like to keep the gardens going,” Kristin says. “Gardens evolve. They never stay still,” Tara says.

Among the work undertaken in the gardens since, Kristin has planted 70 acres in oak and ash trees. Both house and gardens are open to the public in the summer months, with tours being given by one or other of the sisters. “Visitor numbers are much higher in the last couple of years, now we are part of the Waterford Garden Trail,” Kristin says. Even so, Tourin received only 1,000 visitors last summer, which the sisters admit sadly is a far lower number than they would like to welcome.

The sisters show me around the parts of the house that visitors see. The hall, which the front door originally opened into, is dominated by a double staircase, carved in Irish oak. Few hotels have lobbies as grand. The hall recently gained a wood-burning stove. It’s late April, but the house is still chilly. In January, the huge rooms must be very cold. Are they? The sisters laugh. “Everyone is cold in the winter, aren’t they?” Andrea answers rhetorically.

There is a striking life-size marble figure of a woman on the staircase landing. “I’m afraid we don’t know anything about the marble lady,” Kristin says apologetically.

“I think the house is more about light and space, than its contents,” Andrea observes.

The formal sitting room has bow-shaped doors that lead out into the garden, where there is a bucolic pastoral vista over acres of open parkland, edged by woods. The sunken garden with its ornamental pool was symmetrically designed to reflect the house within it. “It’s beginning to get a bit choked up, but there are crested newts in the pond, so we can’t clear it for the moment,” Tara explains.

Andrea points out a eucalyptus tree that has grown to be higher than the house. “I got smacked for jumping over that tree as a child,” she recalls. “I thought I was a pony.”

Kristin trains red setters, and there are several in a fenced-in area, that bark hopefully when they see her. In addition to Tourin House itself, on the land there is also the former gardener’s house, now let out, and a large house adjacent to the 18th-century tower house, also let out. There is also an out-building that functions as a cafe in summer, and another lovely building with several rooms that is Andrea’s art studio, as well as a working stableyard, where her horse is kept. Frankly, I am losing track of the number of buildings when Andrea points out a dark green shed. “That’s a squash court,” she explains briskly. “Daddy used to train in there. He was an Irish squash champion.”

“But we don’t know in what year,” Tara admits.

Tourin used to have eight glasshouses, including one that was used only to grow grapes. Just one of the eight now remains. It’s in the beautifully maintained walled garden. There are dozens of plum and cherry trees, each with a nimbus of white blossoms around them. There’s a kitchen garden, a herb garden, and a flower garden here, too.

Tara is particularly interested in flowers, and has planted 130 varieties of hybrid bearded irises in a bed where two of the former glasshouses used to be. Each plant has a stick in front of it, with the name of the variety written on it. They sound more like greyhounds or horses than flowers: Lovely Senorita, Flirting Again, Edge of Winter, Longport Fairy, Hocus Pocus, Live Jazz, Magical Encounter, Snowy Owl, and Tara’s personal favourite, Irish Moss.

When asked what size the walled garden is, Kristin answers, “One and a half acres.”

They stare in puzzlement around the walled garden that is so familiar to them, brows collectively furrowed. They genuinely don’t know what size it is. In a way, this makes complete sense. When you are responsible for the upkeep and maintenance of 360 ancestral acres, as these three extraordinary sisters are, it simply isn’t important to know the exact dimensions of your walled garden.


The Waterford Garden Festival runs until May 12th. As part of the festival, the Jameson sisters will host a talk about whiskey blending and distillery by distiller Barry Crockett in their home at 7.30pm on May 11th. Whiskey will be served. Booking essential, tel 058-54975.
See waterfordgardentrail.com

Tourin House and Gardens is open from May to September, from 1pm-5pm, Tuesday to Saturday. See tourin-house.ie