The Gathering: shakedown or success story?

More than halfway through the initiative, opinions of tourism insiders range from ‘simple and clever’ marketing to ‘a crackpot waste of money’ 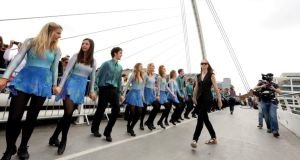 Jean Butler cheers on the dancers taking part in Riverdance: The Gathering Longest Line on Sunday, as 1,693 dancers from 44 countries gathered on the Liffey quays to break the previous world record of 652 people dancing in a line, set in Nashville, Tennessee. Photograph: Jason Clarke Photography

If you’ve heard of The Gathering, you’ll have an opinion on it. Gabriel Byrne certainly did. Last November the actor described the year-long initiative by Fáilte Ireland to encourage people to visit Ireland as “a scam to shake down the diaspora for money”. His remarks attracted international attention, and were received with dismay here by the organisers of The Gathering – or to give it the full title that no-one ever uses, The Gathering Ireland.

The budget for 2012 to promote The Gathering was €5 million. This year, it’s €7 million. The target is to bring an extra 325,000 visitors to Ireland this year, which, if achieved, will apparently bring in €164 million to our banjaxed economy. The US is a prime target market, as those visitors traditionally have the highest spend per head.

We’re now more than halfway through this Gathering year, and so how is it turning out? To date, 2,459 events have taken place, with 1,801 still to happen, and the designated website is still absorbing new events. Ah, the website. Perhaps it’s because there are so very many events posted on it, it’s a highly frustrating, time-consuming and confusing experience to try and navigate your way through, no matter how you use the search filters.

A Gathering can be anything you like. An Evening with the Chieftains in Dublin is listed. So too is the Sligo County Show, a Fleadh Cheoil in Limerick, a performance of Riverdance, a triathlon in Dún Laoghaire, the World Youth Fly Fishing Championships in Monaghan – events that would happen anyway. There are corporate events, clan gatherings, school and college reunions, tracing of roots and 50th wedding anniversaries.

Jacinta Doolan is the director of Trident Holiday Homes; a rental organisation that has 1,500 properties to let in 70 locations around the country. “Anything that brands Ireland in any kind of way is a good thing for those of us who work in tourism,” is her view. “The Gathering might sound twee, but . . . at least they’re not selling people leprechauns and shillelaghs. They’re actually selling things that we’re very good at; meeting up with people.”

Doolan thinks Gabriel Byrne “missed the point” in his remarks. “The sole purpose of the Gathering was as a marketing idea,” she says. “It’s simple and clever. It’s a branding focus for this year. I think nobody really knew anything about it until Gabriel Byrne said what he did. He focused attention on it. There was coverage everywhere after that. If I had been the person marketing the Gathering, I would have been rubbing my hands with all the publicity he generated for it.”

When they take bookings, Trident staff try to find out why people are booking that particular property, so they can make the best match for their needs. In the process of doing so, they’ve taken several bookings for Gathering events. Their most unusual one was a Catholic pilgrimage group from France, who booked six houses in Connemara and brought their own priest and translator with them. “They had heard about the Gathering from one of their group who had Irish roots. They came and toured as many holy places as they could; places like Knock.”

Another recent booking they had was in the Burren, again a group that booked six houses. “They had all been in university together, and now were all married and had families, and they’d been promising to get together for years. This year, they said the Gathering made them do it.”

Bookings are up 19 per cent on last year, and Doolan attributes a “significant part of that” to the Gathering effect. “I think promotion of tourism in Ireland has been very fragmented in recent years: websites, apps, campaigns. The only real purpose of what Tourism Ireland Inc does is to brand Ireland, and that’s what they’ve done well this year.”

“We bring on average 20,000 Americans into Ireland every year, which is 50 per cent of our market. We have a question on our website when they make a booking, as to if they are coming here because of the Gathering. Only about 1 per cent of them have heard of it. We cover all markets, from hostels to five-star hotels. Numbers from the US might be up, but that is due to the fact the US dollar is strong compared to the euro. It has been a total waste of taxpayers’ money. The return compared to the spend will be minuscule.”

Michael Vaughan, owns and manages Vaughan Lodge Hotel in Lahinch, Co Clare, and is president of the Irish Hotels Federation (IHF). “I think Gabriel Byrne did the tourism family in Ireland a huge, huge favour by bringing up the topic of how we treat the diaspora, and the ‘shakedown’. He started the conversation about how we should represent Ireland for the modern tourist from the diaspora. As tourism bodies, we weren’t as aware of it as we should have been. It was a wake-up call for us, and it has focused us on changing the tourism message.”

The IHF has been trying to monitor how many Gathering-related visitors are using their hotels this year. “There is nothing in the hundreds,” Vaughan says, “but there is a whole lot of people getting back in touch with Ireland because they heard about the Gathering. I had a family of eight from Virginia stay with me for three nights this summer. Their father said he wanted to bring them back to Ireland before he died, because this was where his great grandmother came from. They weren’t attending any formal Gathering event, they had just come by themselves to be together in Ireland. There are a lot of US people who have been planning to come to Ireland in the next few years anyway, and this has provided a hook to do so.”

IHF members have also been reporting “a lot of smaller family reunions from the domestic market. There are bookings for 12 people for reunion lunches or dinners at local hotels, and people are saying its their own little Gathering.

“Those aren’t registered as Gatherings as such, but we know they’re happening; lots of reunions and little family lunches and dinners. They’re happening under the radar, all over the country.” Vaughan sees this as a “subtext” to the bigger story.

Visitor numbers
Vaughan thinks the hoped-for figures of 325,000 extra visitors is optimistic. “I think we over-egged the numbers early on,” he says. The Gathering organisers themselves say it will be mid 2014 before the data about visitor numbers will be known and collated.

Vaughan believes the year is about more than simply attracting tourists. “If the Gathering creates a sense of purpose within tourism in Ireland, that in itself is a huge thing. The Gathering could look like a cynical exercise to get tourists in here, but when you start looking at it, it is not like that; it has been about benefitting communities through tourism.

“The Gathering has been more a movement through tourism by small communities: what can our town or village do to attract tourists and make them stay longer? I think that will be the ongoing legacy.”

Going up: Rathgar super homes with lifts for €3.25m each
6

What is the going rate for a home in Co Donegal?
9