The fine art of stuffing stiffs 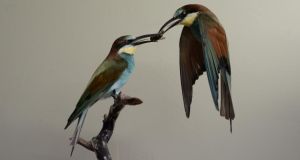 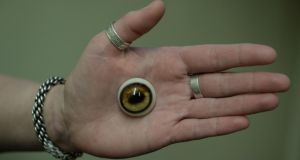 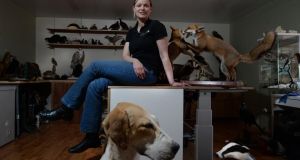 Uncanny: Ingrid Houwers and some of her pieces displayed in her workshop. Photograph: Charles McQuillan/Pacemaker 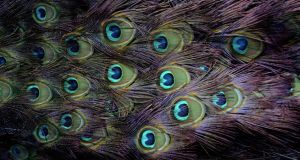 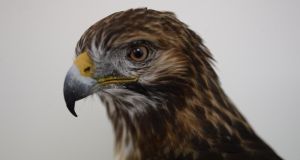 Uncanny: taxidermy by Houwers in her workshop. Photograph: Charles McQuillan/Pacemaker

From the moment you walk into Ingrid Houwers’s studio, you feel like you’re being watched.

A red squirrel pauses to dart a beady eye over its shoulder, a fox crouches low to avoid being seen and a buzzard stares out imperiously from its high perch. All of them seem caught in a single moment, suspended in time, ready to scurry or leap or fly in the next second.

The Dutch-born taxidermist, who now lives and works in Bangor, Co Down, has the uncanny ability to bring dead animals back to life, or at least to achieve the next best thing: the illusion of life.

“What I want to see on people’s faces is a double-take,” says Houwers. “Is it actually alive? The creature should be so life-like that they have to look twice.”

Now 28, she has been a professional taxidermist for over 10 years. Growing up in Lelystad, Holland, in a house on the edge of a forest, Houwers would often pick up rabbit and bird skulls, fascinated by their beauty and delicacy, and by the age of 14 she had joined the Dutch Taxidermy Guild.

Later, her love of art, especially Dutch masters and pre-Raphaelite paintings, came to influence her taxidermy skills and perhaps it is this aesthetic sensibility that gives Houwers’s subjects such remarkable grace and character. One award-winning piece is a pair of courting bee-eaters, which seem to float in mid-air, a bumblebee suspended between their long beaks.

Winning prizes in the world of international taxidermy isn’t easy: judges do odd things like shining flashlights up the noses of animals to check that the vascular system is accurate. It’s not simply a case of stuffing a carcass and hoping for the best.

And being a taxidermist is a more varied job than you might think. On any one day, Houwers, who originally trained as a vet, can find herself skinning a cheetah for academic research, helping blind children learn about wild animals from the feel of their fur and claws, or teaching a group of interested amateurs how to dissect an owl. An accomplished silversmith, she also makes jewellery from boar tusks and the antler tips of Irish red deer.

More recently, Houwers has been supplying the HBO series Game of Thrones, which is partly filmed in Northern Ireland, with ethically-sourced skulls, furs and skins, for costumes and set dressing. One of her proudest souvenirs is a photograph of Thenn Warg, played by Joseph Gatt, standing with Houwers’s eagle owl perched on his shoulder. “We had to send it to Iceland as a stand-in, because the real owl didn’t have its paperwork sorted,” she explains.

There’s no doubt that taxidermy is a complex art which is more than the sum of its parts. “Anyone can learn how to put an animal back together,” says Houwers, “but there’s a big difference between putting a bird on a stick, preserving it stiffly, and recreating an image in life. Some people paint with oils, some with watercolours. I use skin. It’s like taking sculpture to a different level.”

Each piece takes between 40 and 50 hours to make, and involves a laborious process of cleaning and tanning the skin, carving a form from special anatomical foam, then pinning, painting, resculpting and airbrushing the animal into as impeccable a state as possible.

“The benefit of taxidermy is that you would never normally get this close to a creature in its natural environment. And you’re using something that would otherwise go to waste.”

I’m surprised to learn that the vast majority of Houwers’s subjects, about 90 per cent, are road-kill. Her partner, an Irishman whom she met while at art academy in Rotterdam, is used to people arriving at the door with dead badgers in bin bags.

She will, reluctantly, accept pet commissions. “I try to talk people out of it, to be honest. They come to me in a moment of deep grief and they hope that I can somehow bring their pet back. But it won’t be their pet, it’ll just be the external shell, a touchable portrait. I ask them to go away and think about it, then if they’re sure, I will do it. And some do take great comfort from that.”

There’s nothing remotely macabre about Ingrid Houwers or her work, but she does find that people are occasionally squeamish about it. “Some look at the animal, and all they see is death. But it’s really not at all creepy. It’s not about death, it’s about preserving a moment in life.”