We all love Richard E Grant in his classic role of the acerbic, alcoholic, unemployed actor Withnail. Now the Swaziland-born movie star has reinvented himself as a hit perfumer – without giving up the day job 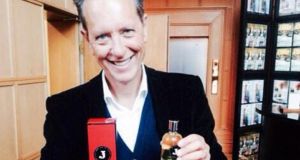 Richard E Grant: “There are 1,100 perfumes released every year. It’s like a 57-year-old man saying, ‘Right. I’m now going to release a pop record.’ You don’t stand a chance in hell. But here I am”

Richard E Grant has appeared in everything from Gosford Park to Doctor Who, from Bram Stoker’s Dracula to Downton Abbey. He has even made a wildlife series, The Seven Deadly Sins, for the Discovery channel.

For many of us, however, Grant is still synonymous with the ramshackle anti- hero of the 1987 cult comedy Withnail & I – especially the scene in which an inebriated Withnail scandalises a quaint country tearoom by thumping the table and delivering the immortal line, “We want the finest wines available to humanity, and we want them here, and we want them now”.

These days Grant is a purveyor, not of fine wines, but of upmarket scents. His first fragrance, Jack, notched up a major success when it was released a year ago at Liberty’s of London, Next week he will be in Dublin’s Brown Thomas to launch his follow-up product, Jack Covent Garden. And he is already working on fragrance number three, which will be released next spring.

“We were in profit after six months,” Grant says. “Jack became Liberty’s third best-seller, despite heavy competition from all the well-known brands that they stock. They were amazed. I was absolutely flabbergasted.

The switch from player to perfumier is, Grant insists, entirely in character – as well as being the fulfilment of a lifelong dream. It’s not simply a matter of lending his name as a celebrity endorsement. “It’s a one- man, self-financed passion,” he says.

Grant’s first experiment in perfumery took place when he was growing up in Swaziland.

“When I was 12 years old I fell madly in love. I went to the local pharmacy, but buying perfume was out of my pocket-money range. So I thought I could make some out of rose and gardenia petals.

“I put them in jam jars filled with boiled sugar water, and buried them in the garden for two weeks. I thought when I dug them up they would be bottleable. Of course they weren’t. They were stink bombs.”

Three years ago the handbag designer Anya Hindmarch (a family friend) remarked on Grant’s fondness for sticking his nose into shrubs and flowers while on holiday in the Caribbean. “She said, ‘Are you going to do something about this?’ I said, ‘Do you mean psychiatrically?’ She said, ‘No. I mean making a perfume’.”

Having assembled his favourite ingredients – including, this being Richard E Grant, marijuana – and consulting a professional French “nose” by the name of Alienor Massenet, there followed six months of fiddling about with oil samples and pipettes, mixing and sniffing and starting over, before a midnight “mini-eureka moment” when the fledgling fragrance finally matched the creator’s idea of how it ought to smell.

The new perfume, Jack Covent Garden, was inspired by Grant’s stint as a waiter in London’s theatre district when he first came to England in 1982.

“I always knew that on first nights actors are given flowers and fruit – and very often use ginger to clear their throats. As do opera singers.”

As he riffs on the various “notes” of Jack Covent Garden (it contains oranges, rose, lime, ginger, orris oil and pimento), it becomes clear that Grant really is a total fragrance nut.

“The best way to describe it,” he says, “is that chefs I know – amateur ones, as well – walk around trying to imagine what ingredients will go together. This is what I obsessively think about. Mixing these scents in my head and then trying to see if I can make it become something delicious.”

How has he managed to combine the role of entrepreneur with a full-time acting career? “Well, there are gaps in acting,” he says. “When you’re unemployed you have time. And when you’re filming there always big gaps.” Currently, for example, he is filming a TV adaptation of Dr Jekyll and Mr Hyde. “But I’m playing a secret service man, so I’m not on every day.”

What’s the least satisfying thing about being a perfumer? “I failed all my maths at school, so dealing with the business side has been an incredible learning curve.”

And the most satisfying? “When my wife or daughter tests the perfume on people who have no idea that I’ve done this, and they love it. The kick of that is as good as any good review I’ve ever had in my day job.”

Considering that Grant’s performance in Withnail & I has been described as a tour de force, truly that is the sweet smell of success.

Richard E Grant will be in Brown Thomas, Dublin on April 24th and 25th.