Swedish scholar at the summit of Irish folklore studies 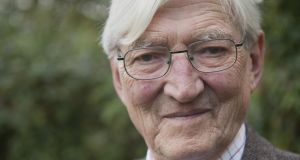 Bo Gunnar Almqvist, professor emeritus of Irish Folklore at University College Dublin, was born in Alster, a rural area in Varmland, western Sweden. His father, Oskar, a police superintendent, died when he was 14. His mother, Hulda, was steeped in tradition and bequeathed her store of proverbs to Bo, who had a saying for every occasion.

He enrolled at Uppsala University in 1950, where he studied Nordic languages and folklore – Old Norse and Icelandic being his speciality. He also took Irish lessons from visiting folklore scholar Kevin Danaher, later to be a colleague at UCD.

Uppsala’s professor of folklore at the time, Dag Stromback, became his mentor and lifelong friend, the two men sharing a fascination with far-flung outposts of the Nordic world as well as the languages, literature and folk culture of Scotland and Ireland.

Study in Iceland
Afer graduation, he spent a year at the University of Iceland in Reykjavik, taking the prestigious BPhil degree in Icelandic language and literature. He had to return home for mandatory military service, much of which he spent as a library attendant at the military archive in Stockholm.

On discharge he returned to Iceland, where he first worked on a farm before becoming a lecturer in Swedish at the University of Iceland. He returned to Uppsala in the early 1960s, where he completed his doctorate, a study of magical satire in the Old Icelandic tradition, and was appointed lecturer and then acting professor of folklore.

He visited Ireland for the first time in 1953. In the summer of 1957 and again from 1966 to 1972 he collected folklore at Dún Chaoin, in the Kerry Gaeltacht, primarily from Mícheál Ó Gaoithín, son of the legendary Peig Sayers, and later from the “Queen of Learning”, storyteller Cáit “Bab” Feiritéar.

In 1972, after the retirement of Séamus Ó Duilearga, he was appointed professor of Irish folklore at UCD. He established Irish and comparative folklore as an academic subject in UCD and was director of the archive of folklore, now the National Folklore Collection.

Innovative
Among the innovative courses Prof Almqvist instituted was a module on “The Folktale and Medieval Literature”, offered to students taking the elite “Pure English” degree. His students on this course included poet Mairéad Byrne and writer Éilís Ní Dhuibhne. The following decade, in 1982, he and Éilís were married. They had two sons, Ragnar and Olaf.

For some 20 years he edited the journal of the Folklore of Ireland Society, Béaloideas, in collaboration with Dr Pádraig Ó Héalaí. Prof Almqvist wrote more than 90 articles and numerous books on Irish and international folklore. He edited, sometimes alone and often in collaboration, several volumes of essays, the most recent being Atlantic Currents/Sruthanna an Aigéin Thiar, a collection of essays honouring Séamas Ó Catháin.

Never losing his west Swedish accent, he was fluent in Irish, English and Icelandic, as well as other languages which he considered “more ordinary”, such as German, French and Latin.

Dag Stromback said Almqvist wore his learning like a feather and his contribution to learning in Ireland was reminiscent of the great German Celtic scholar Kuno Meyer.

Following his retirement in 1995, he continued lecturing, writing and publishing as well as visiting places he loved such as Iceland, the Faroe Islands, Shetland, Orkney, Scotland, Sweden: the remote and beautiful territories of the north.

He is survived by his wife, Éilís Ní Dhuibhne, his daugher Marja, sons Ragnar and Olaf, and his sister Vera.