Stop with the C-Word. It’s June, Santa is more than 180 days away

Top 13 toys for Christmas 2015 have been released. Kate Holmquist is not impressed 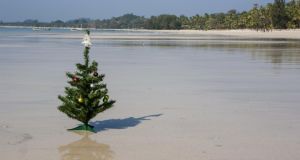 The C-word is being spoken out loud. The C-word is creating anxiety. The anti-social C-word being uttered in June, even though Christmas is 186 days away and - as Christmas shopping websites remind us - a mere 183 online shopping days away.

Some parents haven’t got over the trauma of trying to find the Frozen Elsa doll last December 2014, but it’s time. Get your act in gear. The top 13 toys for Christmas 2015 have been released by Argos. In June. Sorry, I already said that. And the Frozen Singalong Elsa Doll (58.99) is on it at number 10, even though Frozen 2 the film isn’t expected until 2016.

This year’s Christmas movie is already being promoted too - Daddy’s Home with Will Ferrell and Mark Wahlberg. In the trailer, Daddy (Ferrell) is drawn by his daughter with a knife in his head. We Christmased-out parents would have liked to have put it there.

None of this will be familiar to you unless you watch kids’ TV and are keeping track of upcoming movie releases. The list lacks the toys associated with Star Wars: Episode VII - The Force Awakens, and Avengers: Age of Ultron - toys which will surely be produced in limited quantities just in time for parents to be unable to find them if they can afford them.

It’s blackmail, pure and simple. The marketing is worming its way into kids’ brains already. And no one wants to be the parent who fails to produce the desired toy. But these aren’t toys in the traditional sense. An old-fashioned dolls’ house is a toy. Cars and trains on a wooden track are toys. Such things are truly interactive and last for years. Even iPads are being shown in studies to be good for childrens’ brains due to the intuitive nature of using them.

All of this plastic being produced in China is not intuitive. It’s advertising.

And in six months’ time, your child will have completely different interests. If you want a savvy child, tell them that they won’t get anything advertised in movies or on TV. Protect your child’s imagination and give them marketing-free toys.