So, Jerry, what first attracted you to billionaire Rupert Murdoch?

Anthea McTeirnan muses on the engagement of Rupert Murdoch and Jerry Hall, as well as looking at other couples where there’s a large age gap 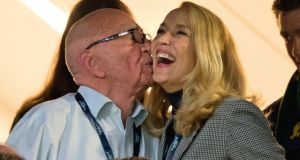 The relationship has given Rupert “renewed vigour”, a source said.

Have you ever thought about your parents having sex? No? Well done for being normal.

So imagine the planet’s revulsion at the thought of 86-year-old media mogul Rupert Murdoch getting up close and personal with 59-year-old former supermodel Jerry Hall. As Homer Simpson once said: “Who’s paying for that wedding?”

And it looks like there is an actual wedding to be stumped up for after the couple hooked up a few months ago.

It seems that in the kind of indecent haste that would even make the wedding-hardened Cheryl Fernandez-Versini blush, the golden couple became engaged over the weekend in Los Angeles, where they attended the Golden Globes.

Thrifty as ever, the owner of the Times newspaper popped the engagement notice into the January 12th edition of the paper. It had a black border, which seems only appropriate for elderly media mogul Murdoch.

We just hope he got a discount, although the rumoured usual price of such a classified advert is £300.

The children are no doubt delighted with the 27-year age gap between their new Mom and Pops – and at least some of the 10 will be hoping the lawyers are drawing up the pre-nups as we speak.

News Corp Australia journalists have been among those to congratulate the couple on social media. A prudent move for those behind the Murdoch paywall and on the Murdoch payroll.

Anyone who remembers Wendi Deng’s more-than-honourable face-saving dash to save her then-husband Rupert from a pie thrown by Jonnie Marbles, as Mr Murdoch addressed a British parliamentary committee about the News International phone hacking scandal, will know that it is not Rupert’s first marriage.

The happy couple's announcement in the Times 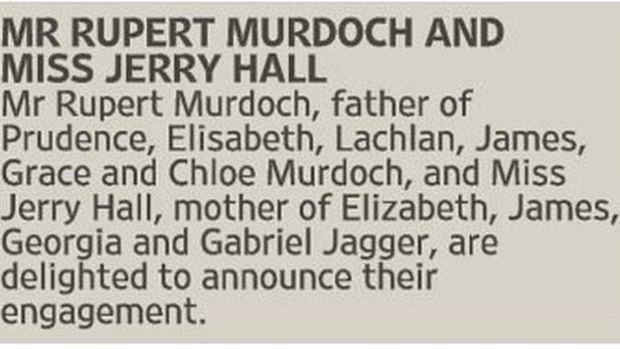 In fact, it is his fourth marriage. Go figure.

It is Hall’s second marriage – or her first, depending on how much credence you give to Mick Jagger’s claim, made during divorce proceedings in 1999, that their Hindu ceremony in Bali in 1990 was invalid.

Apparently a spokesman for the Murdoch family gave a statement to the Times about the happy ending.

“They have loved these past months together, are thrilled to be getting married and excited about their future,” they said.

A source apparently told the Daily Mail that “he is very happy, and she makes him laugh”. The LOLs are probably what springs to mind when we think of the leggy Texan alright.

As for Rupert, the relationship has given him “renewed vigour”, a source said.

Too much information surely?

Mind the gap: the couples for whom age is just a number

Legendary musician Ronnie Wood (68) started dating theatre production company owner Sally Humphries (37) in early 2012 and the couple got married in December that year. They are expecting twins in June, 2016. Good luck with that Ronnie.

Mary Poppins actor Dick Van Dyke (89) got married to make-up artist Arlene Silver (43), in February 2012. Speaking about their 46-year age gap, Silver said: “He is a lot of fun. He’s not immature in a bad way. He’s immature in a good way with the wonder of a child. We’re both like children. We feel like we’re both having a second childhood.” Good luck with the nappies, Arlene.

Musician Billy Joel (66) married his 33-year-old girlfriend Alexis Roderick on July 4th, 2015. The couple has been together since 2009.

Like a virgin: Madonna and her younger gentlemen friends

Madonna has been open about her affinity for younger men. Older guys, she said, are simply “not datable” as they lack a sense of adventure. Back off Rupert. Since her split with younger British filmmaker Guy Ritchie in 2008, the 56-year-old has cultivated a reputation of flings with toyboys. Men in their 20s are particularly enjoyed. Material boys, if you like.

“So, Debbie, what attracted you to the millionaire Paul Daniels?” Mrs Merton gave us the quote that keeps on giving. Paul and Debbie’s 20-year age difference looks almost respectable now. You’re going to like this, Debbie… not a lot….