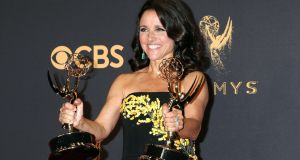 Julia Louis-Dreyfus (56), who plays foul-mouthed fictitious former US president Selina Meyer on HBO’s Veep, has said “One in eight women get breast cancer. Today, I’m the one,” in a short post on her social media platforms. File photograph: Nina Prommer/EPA

Emmy-winning comedic actor Julia Louis-Dreyfus said on Thursday that she was battling breast cancer and highlighted the case for universal healthcare.

Louis-Dreyfus (56), who plays foul-mouthed fictitious former US president Selina Meyer on HBO’s Veep, said “One in eight women get breast cancer. Today, I’m the one,” in a short post on her social media platforms.

“The good news is that I have the most glorious group of supportive and caring family and friends, and fantastic insurance through my union. The bad news is that not all women are so lucky, so let’s fight all cancers and make universal health care a reality,” the actor wrote.

She did not give any further details of her health status.

Time Warner’s HBO network said Louis-Dreyfus received the diagnosis a day after the Emmy Awards earlier this month, where she won a record sixth consecutive Emmy for comedy actress for her role as Meyer. The Emmys are US television’s highest honour.

HBO added that her diagnosis played no part in its decision to end Veep after next season, and that writers would keep working on the final season while production would be adjusted around the actor.

“Our love and support go out to Julia and her family at this time. We have every confidence she will get through this with her usual tenacity and undaunted spirit, and look forward to her return to health and to HBO for the final season of Veep,” HBO said in a statement.

Louis-Dreyfus achieved fame in the 1990s for her role as Elaine Benes on NBC’s Seinfeld, which also won her an Emmy.