Seán Moncrieff: I’m sick of hearing this is the new normal

The coronavirus crisis has taught us to see the best in people, even those we don’t like 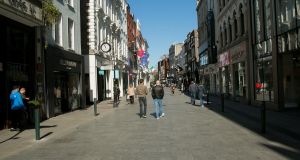 When it’s all over, it will be weird for a while, getting used to all that noise and other people. All the busyness. Photograph: Gareth Chaney/Collins

One phrase I’m heartily sick of hearing – sometimes delivered with a little too much relish – is: “this is the new normal”. There’s nothing normal about being stuck in your home or not being able to shake someone’s hand or crossing the road out of fear when you see a toddler.

This is temporary. But as we’ve been telling ourselves – what we need to tell ourselves – is that things will get back to the way they were before.

More or less. The profound differences in our lives now will have an effect on what it will be like afterwards. It’s bound to be different then, too. And in some ways it should be.

When it’s all over, it will be weird for a while, getting used to all that noise and other people. All the busyness. Being able to stop and chat might initially seem strange. We’ll have to readjust. Even now I worry about Daughter No 4. She’s gone for weeks without playing with another child, and I fear that when the time comes, she’ll have to relearn it; that she’ll think she’s an adult now and start sending the other kids to the naughty step if they don’t do what she says. But she’ll make it. Kids are resilient.

Daughter No 2, in her first year of college, enjoyed the enforced quietude. Before, she said, she had been going out too much and didn’t know how to stop

Will we move around as much? One of the many things we’ll remember about 2020 is that few of us went on holiday or commuted like we used to. Afterwards, some might prefer to continue doing their day job in the home, which will be good for our carbon footprints. Researchers are already detecting dramatic drops in carbon emissions around the world. Herself, who early on was largely confined to working at home, quickly (much to her own amazement) learned the discipline of leaving housework alone while the day job had to be attended to.

Daughter No 2, in her first year of college, enjoyed the enforced quietude. Before, she said, she had been going out too much and didn’t know how to stop. And Daughter No 1, just about to move to London for a big job, had to put the whole thing on hold. But took it with grace and patience.

Out of the family, I’ve been the worst: freaking out about what might happen and how I might not be able to fix it. We’ve all learned something. We all went a little gaga.

One of the laziest Hollywood cliches is of people who dislike each other being brought together to face a common foe and thereafter being best buds. And annoyingly, like most cliches, this has some truth to it. Certainly, in our country, and in many others, the traditional divisions were put aside to fight the virus. In the space of one speech, Leo Varadkar went from Worst Taoiseach Ever to something like Churchillian. The pen-pushers at the HSE were for the first time seen to be doing a good job.

Will it last? For a while, perhaps. But all the other problems and divisions will eventually come roaring back

There have been difficulties and anxieties, of course. Going outside with children did sometimes prompt tutting from other people. Teenagers and some young people didn’t always get the interconnectedness of the problem. But in general it has felt that we’ve learned to trust each other a bit more and to be kinder.

Will that last? For a while, perhaps. But all the other problems and divisions will eventually come roaring back. Some will appeal to the way things were before. Others will claim that’s just an excuse to overlook the problems and inequalities that need urgent attention.

Yet none of us will be able to deny that, for a while at least, we were able to glimpse the best within ourselves and other people; even people we didn’t like. We still don’t know how high the price will eventually be to have enabled us to realise these things. But that makes it all the more precious.