Seán Kenny used his computer expertise to help the disabled

Obituary: A pioneer in the development of assistive technology 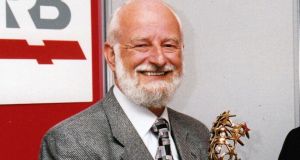 Seán Kenny, who has died aged 73, was a pioneer in the development of assistive technology for people with a range of both mental and physical disabilities. His early adulthood included life as a missionary priest in Africa, during which he met the notorious Ugandan dictator Idi Amin.

Kenny grew up in Dublin, where his parents, Dermot, originally from Derry and his mother Eileen (nee Collins) ran a mixed barbers and general goods shop on South Richmond Street. He was educated at Synge Street CBS, and later in Kilkenny with the Mill Hill Fathers, whose order he joined on leaving school.

After taking a degree at University College Dublin and studying theology, Kenny taught for a year in Liverpool but then worked in London in the late 1960s in outreach to homeless people and drug addicts, an experience that gave him a life-long commitment to the marginalised of society.

He spent two years in Uganda, which, his close friend and former colleague Tom Rowan says, “shook him up a lot”. There, he met a young medical secretary from Ireland, Jean Staunton, and within a year he had left the priesthood and returned to Ireland, where the couple married.

Kenny developed a keen interest in computers, and graduated from Trinity College in 1975 with a diploma in information technology, and thereafter, worked at the National Rehabilitation Board (NRB) until it was broken up in 2000.

There, followed a crucial move into assistive technology for people with physical disability. He worked closely with Dr Ger Craddock at the Central Remedial Clinic (CRC) and in co-operation with the American charity, the National Cristina Foundation (NCF).

The foundation was an innovator in the use of computing to help severely disabled people achieve their potential. Working with Dr Yvette Marrin, a cofounder of the NCF, Kenny organised the shipment of more than 200 used computers to Ireland for re-use in assistive technology, and 50 of them were supplied to the CRC.

He worked with computer manufacturers, such as Dell, to have the hardware reconfigured for use with people with disabilities. Dr Craddock recalls “this made a significant difference: people unable to speak had speaker-output devices [to enable communication] and kids unable to write because of very poor hand movement were able to communicate, participate in education and compete for jobs.”

Under the Eye of the Clock

The breaking up of the NRB in 2000 was a cause of trauma for Kenny, who, Dr Craddock remarks, was upset by the lack of follow-through on the Department of Justice and Equality’s Strategy for Equality policy, particularly in what he saw as the failure to adequately train front-line staff in one of the successor bodies, Fás, (to which Kenny was reassigned), to deal with disabled clients.

Disillusioned, he took early retirement in 2005 but he continued to work with young people, especially those with dyslexia. At Kenny’s funeral, Dr Craddock remarked on the presence of so many young people whom he had helped.

Predeceased by his wife Jean, Seán Kenny is survived by their sons, David and Ronan, a grandchild, his sister Elizabeth O’Doherty and brother-in-law Brian O’Doherty, and by his brother Dermot.

Seat’s new Leon: It’s now better than the VW Golf it’s based on
2

We emotionally reticent Irishmen would be even worse without sport
3