Ross O’Carroll-Kelly: ‘These apartments will be so small, there won’t be room for two people to break wind’ 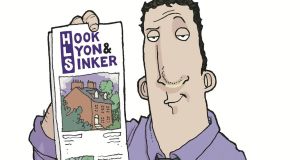 He gives me what would have to be described as a fatherly hug, then he says hello to Sorcha with an enthusiasm that would be grounds for sexual harassment if he was paying her a salary.

The Hook, Lyon and Sinker Excellence in Selling Awards have become as familiar a part of the January routine as bringing my brat of a daughter to Dundrum to exchange her unwanted Christmas gifts for cash and watching my wife walk up and down the Vico Road, swinging her orms and muttering about the Women’s Mini Marathon.

When we arrive at JP’s old man’s gaff, the porty is already in full swing. I hand JP’s old dear the €5 bottle of Shite Hole Neuf de Crap that we picked up in the petrol station on the way here and she looks at the label with a fake smile that tells me it’s going straight under the sink with the cleaning products.

JP’s old man is delighted to see me. And why wouldn’t he be? I must have stuck another five mills in his pension fund with the work I did for him this year. He gives me what would have to be described as a fatherly hug, then he says hello to Sorcha with an enthusiasm that would be grounds for sexual harassment if he was paying her a salary.

“What a year,” he goes. “Not just for you, Ross. I’m hearing wonderful things about this little lady of yours. They’re saying she might even top the poll in Dublin Bay South.”

Sorcha smiles modestly and removes his hand from her bottom. She goes, “A lot can happen between now and the general election, Mr Conroy.”

Namely, she still hasn’t told my old man yet that she’s planning to leave New Republic and run as, like, an independent?

JP’s old man goes, “Nonsense! Charles says you’re going to romp home! Hey, it’ll be great to have a politician on the payroll.”

“Family,” he goes. “It’ll be great to have a politician in the Hook, Lyon and Sinker family.”

He gives me a little wink.

“Anyway,” he goes, “I better get ready to make my speech. You nervous, Ross?”

“About the Seller of the Year award. Hey, I’ll put you out of your misery right now. It’s you again!”

Now it’s my turn to smile modestly. And remove his hand from my bottom. I’m there, “Yeah, no, that’s cool.”

“Well, who else was it going to be? Thanks to you, Hook, Lyon and Sinker is now Ireland’s number one seller of repossessed homes in the €3 million to €10 million category.”

“It is amazing,” he goes. “Let me tell you something about the kind of man you’re married to. When the new planning guidelines were announced allowing for smaller apartments, he sat down with one of our developer clients and he showed him how to turn his plans for a development of 27 apartments into a development of 54 apartments without laying a single additional brick. These apartments will be so small, there won’t be room in them for two people to break wind at the same time. And they said those days were gone forever!”

I look at JP across the crowded living room. From his expression, it’s pretty obvious that he knows that he’s not getting the award. But then he played rugby with me. He knows what a beast I am when it comes to competition.

“You know,” his old man goes, “I meant what I said a year ago. About my succession. I’m getting out of the game. Matter of fact, this is the last time I ever host the Hook, Lyon and Sinker Excellence in Selling Awards. Because next year… you’re doing it.”

He’s there, “That’s right. You’re ready. I’m finishing up at the end of March. I promised JP’s mother I’d retire this side of my next heart attack. So from the first of April, you will be the new managing director of Hook, Lyon and Sinker. Congratulations, kid!”

I’m literally speechless. I’m there, “I genuinely don’t know what to say. But what about JP?”

It’s just an expression. I don’t mean it.

“JP is my son,” he goes. “And while I love him very, very dearly, he couldn’t sell a dummy pass to a blind prop. He’s not the man to lead the company through the next period of temporary economic buoyancy. No, that man is you!”

I’m there, “Is this actually happening?”

He taps his brandy glass with his wedding ring to bring hush to the room. “Boys and girls,” he goes, “it’s great to have you here for the annual Hook, Lyon and Sinker Excellence in Selling Awards. There’s no doubt that 2015 was an incredible year for the company. It’s hard to believe that three or four years ago, so-called experts were saying that we would never again repeat the mistakes of the past. Well, we are repeating them – and I’m happy to say we’re going to go on repeating them!”

I look at JP. He has a look of just, like, shock on his face? Sorcha grabs my hand and squeezes it hord. I honestly haven’t seen her this proud of me since Mary McAleese handed me the famous tinware back in the day.

I wait for JP’s old man to say my name. Except he doesn’t. There’s just, like, silence. I turn around to him and I notice that he’s clutching his left orm and he’s, like, blue in the face. Then I look at JP again and he shouts, “Someone phone an ambulance!”

And JP’s old man suddenly falls face-first through the coffee table before I manage to even say the words, “Oh, fock!”