Ross O’Carroll Kelly: ‘Look at Hillary. So much of her strength must come from having an amazing husband like Bill’

"Once the election is over, the government is planning to come down hord on people who haven’t paid their water bills... I can’t believe you haven’t heard about Aquatraz.” 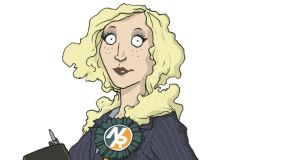 Sorcha has been struggling to get her message across on the doorsteps of Kimmage, Harold’s Cross and Terenure – and it’s not just because she’s gone back to using her Mount Anville accent. It’s all very well her telling voters that they should be paying for the water that comes out of their taps, but as soon as they go, “Why haven’t you paid for yours, then?” she finds herself on suddenly shaky ground.

She’s tried telling them the truth, which is that I look after all our household bills by giving them to my old man to pay. But it’s not the kind of message that’s likely to grab votes. “Aren’t you very lucky?” is about the politest response she’s heard this week. “Not only do you not pay for your water, you don’t pay for your gas, your electricity or your phone either.”

Or our daughter’s mobile, they could have added, which would actually be our biggest monthly outgoing if the bills weren’t sent directly to Charles O’Carroll-Kelly, Ailesbury Road, Ballsbridge, Dublin 4.

I spent most of the week trying to persuade her to just, like, pull out of the election, because she’s heading for a serious hiding, but she’d just smile and say, “Every difficulty is an opportunity in disguise!” before walking up the next gorden path to have yet another front door slammed in her face.

It’s, like, three o’clock on Friday afternoon when she finally decides to finish for the day and I drive her, sobbing quietly in the front passenger seat, back to Killiney.

I’m there, “I told you not to get involved with him. The man’s as crooked as a French put-in, but you were happy to ignore that fact.”

“Oh, so it serves me right for actually caring about the kind of future we’re going to bequeath to our daughter?”

“Okay, don’t stort taking this out on me.”

“I’m just wondering what kind of a man are you that at 36 years of age your father is still paying all of your bills. And don’t you dare say you were on the Senior Cup team at school!”

“I know it’s a fact, but you can’t use that excuse for being useless for the rest of your life.”

“I’d like to think we still live in a country where I can.”

“That’s how your father was able to do what he did – he found my weakness and he exploited it.”

“Are you saying I’m your weakness?”

“All I’m saying is that I look at some of the really strong women I admire in politics and they all have really strong men behind them. Look at Hillary Clinton, Ross. So much of her strength must come from having an amazing husband like Bill.”

I’m there, “I’ve always tried to be like Bill. I can try even horder in the future.”

She goes, “Don’t bother, Ross,” and she stares out the window of the cor. “Just don’t bother. My only hope is that, between now and election day, the people of Dublin Bay South will examine their consciences and realise that we should be investing the same amount of money in our natural resources as we do in our children, since they’re both essentially the same thing – as in, like, the future? ”

I’m there, “I’m sure that’s exactly what’s going to happen, Sorcha, when it comes to the crunch.”

For an intelligent woman, my wife can be slower than Lent.

I make the mistake, then, of driving home through Dalkey. There ends up being a massive crowd outside the Tramyord on Castle Street and the traffic is slowed to a crawl. As we get closer, we suddenly realise that right at the centre of this crush is my old man, kissing babies and shaking hands and posing for selfies with his adoring fans.

He spots us, of course, and he makes sure to give us a big wave. He’s all, “Sorcha! Kicker! Another day on the hustings, eh?” really rubbing it in.

Sorcha puts her hand up to her face and goes, “Keep driving, Ross. I don’t even want to look at him.”

I’m there, “That’s the thing about my old man – people for some reason love him. I sometimes think, ‘If only they knew the real Chorles O’Carroll-Kelly.’ For instance, if they only knew about this prison plan of his.”

Sorcha’s head suddenly spins around like Linda Blair’s in The Exorcist. She goes, “What prison plan?”

I’m there, “Are you saying you don’t know about it?”

“Yeah, no, once the election is over, the government is planning to come down hord on people who haven’t paid their water bills. They’re talking about jailing them in this, like, private prison. Ireland’s first, apparently. The old man is going to put in a tender to build and run it.”

“Yeah, no, I walked in on him and Hennessy one day when they had the plans out on his desk. I can’t believe you haven’t heard about Aquatraz.”

“Aquatraz? That’s what the prison is going to be called?”

“If my old man gets the nod to build it, yeah. I think the name was actually Hennessy’s idea.”

“Ross, where are these plans now?”

“I don’t know. I presume they’re still in the old man’s safe. He obviously wants to keep the whole thing on the down-low until after the…”

I stop, suddenly realising where this conversation is going. Ailesbury Road, essentially. Sorcha is smiling at me and, at the same time, literally salivating.

She goes, “Ross, turn the cor around.”

I’m there, “Sorcha, you are not breaking into my old man’s house to steal from the safe.”

She’s like, “Of course I’m not! Oh my God, Ross, my reputation means far too much for me to do something illegal like that. That’s why you’re going to do it for me.”

Remember Octomom? She and her 14 kids are doing well
9