Robin Williams: So plentiful were his gifts he rarely reached for ‘off’ switch 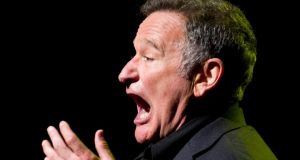 Robin Williams: In the wake of his death statements such as: ‘If I keep them laughing, they can’t delve any deeper’ will be parsed for meaning and significance. Photograph: Charles Sykes/Invision/AP

Robin Williams was in an alley in central London, behind the Comedy Store venue, shivering because of the cold and strung out because he so desperately needed to get up on that stage to get his fix of stand-up.

“I’ll only do five minutes,” he smiled to the compere. He did an hour.

It was Whirling Dervish comedy – he was practically bouncing off the walls as he improvised riffs like a jazz master. One moment he was John Wayne playing Macbeth, the next a dog on LSD. He was “tap-dancing on a hot plate”. It was some five minutes.

He always said he was most liberated when doing stand-up – protected by the force field of genius the way he was not when he was “Robin Williams” walking down the street.

He liked to be “on” whether that was the stage, TV, on film or in person. He compared his comic compulsion to having a dart in his neck.

In the wake of his death statements such as: “If I keep them laughing, they can’t delve any deeper” will be parsed for meaning and significance. He self-medicated depression early in his career with drink and drugs before being “sobered out of addiction” by the death of his friend and fellow comic John Belushi from heroin.

In a parallel with the death earlier this year of Philip Seymour Hoffman, Williams had remained sober for 20 years (Seymour Hoffman was sober for 23 years) until both had “just the one drink” again and the floodgates opened.

Over the last few years, Williams had been the subject of an intervention by his family and only left rehab in the US a few weeks ago.

Even his visits to rehab weren’t off-limits. On his last tour he joked about how he had picked a certain rehab centre as it was “in the middle of wine country”.

As one of the world’s great stand-up comics – up there with Richard Pryor and Bill Hicks – he had little influence on other comics because no one could imitate his manic energy, quick-fire patter, truly remarkable voice-bending ability and stunning improvisational skills.

It’s no secret that a lot of lesser comics didn’t like him because they felt he “borrowed” their material. Such accusations made Williams furious, which is why he took to waiting in alleyways outside comedy clubs before he went on to avoid the bitchiness of the dressing room.

“You meet a comic and say ‘hello’ and they scream at you, ‘I was the one who came up with “hello”. You’re stealing my material’,” he once said.

So plentiful were his gifts that he rarely reached for his off switch. “I really like being on . . . just because you don’t have the batteries, don’t call up and tell me to turn out my light,” he said.

It was a typically hyperactive audition for a guest character on Happy Days – in which he sat on the producer’s head – that got him his start. He played an alien called Mork and stole the show to the extent that he got his own series – Mork and Mindy.

But stand-up and sitcom couldn’t contain his talents. Good Morning Vietnam, Awakenings, The Fisher King, Good Will Hunting and One Hour Photo showcased his talent on the big screen. In theatre, he was acclaimed for his portrayal of Estragon in Waiting for Godot.

But despite all the Oscars and Golden Globes, wherever in the world he was, he would find himself drawn to the back alleys of the small comedy clubs, promising he would only do five minutes and then tearing it up with comedic free association. To paraphrase what Owen O’Neill said of Bill Hicks: they say Robin Williams died, but I never once saw him die.