Analysis: For more than 40 years, the comic and actor first seen in Mork and Mindy gave value to audiences 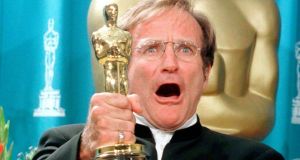 Robin Williams with his Oscar for Best Performance by an Actor in a Supporting Role for his part in ‘Good Will Hunting’ at the Academy Awards in 1998. Photograph: Reuters

Robin Williams was a superb, mercurial stand-up comic with a staggering talent for improv and verbal riffing, though his movie career finally evolved into an intriguing split: sugary sentimentality or an ambiguous, menacing darkness.

Something similar happened with Steve Martin and Jerry Lewis. The “Mr Hyde” in Robin Williams’s movie persona was well known.

So the news of his death, and the indication he has taken his own life, is deeply shocking. He clearly suffered from depression and his brilliance assumes a deeply sad aspect.

Williams could suspend his merciless, crazy irony almost entirely for glutinous family movies like Patch Adams, in which he played a doctor who treated sick kids using his irrepressible sense of humour, or the solemn fantasies like Bicentennial Man, or even his second World War drama Jakob the Liar.

Or he could be chilling and sinister, as in One Hour Photo, a disturbing drama from 2002 in which he played the drugstore photo lab employee (in the days before digital cameras) who becomes obsessed with the pictures he develops showing a suburban family.

Then there was his performance in the ice-cold, ultra-black comedy World’s Greatest Dad, in 2009, in which he plays another creepy yet tragic character, a high-school teacher whose son dies in a grisly accident, and who then concocts a bogus suicide note and rides a wave of celebrity and sympathy.

Williams had a big-hearted side, a love of broad comedy and a muscular, physical talent for it, which he showed off in his smash-hit drag act Mrs Doubtfire from 1993.

He played a divorced guy who disguises himself as a housekeeper with a bizarre Scottish accent, employed by his unsuspecting ex-wife, so he can keep an eye on the children.

The role showed off Williams’s talents – the zaniness, the dressing up, the bizarrely transparent absurdity, combined with his big-hearted, faintly lachrymose vulnerability and sentimental concern for children.

For me, his best movie was Good Morning, Vietnam from 1987. It was hardly the first time I had seen him – that, of course, was in his legendary 1970s television comedy Mork and Mindy, which introduced the world to his madcap clowning.

But Barry Levinson’s film was perhaps the nearest a feature film came to representing his stand-up style and his subversion. He was Adrian Cronauer, the anarchic, motormouth DJ on Armed Forces Radio who lets rip at the microphone, disses the pompous world of the military, and rips everything to hilarious shreds.

Williams improvised a lot of his speeches himself; only he could have given that full-throttle intensity.

What a remarkable performer. This is a brutal shock.