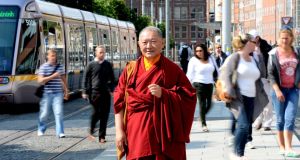 When he was a young boy, Ringu Tulku Rinpoche was forced to flee Tibet along with his family.

Tied to his horse so he wouldn’t fall off it when he slept, he eventually made it to India.

Today, 60 years later, he is a regular visitor to Ireland, teaching Buddhism and meditation.

On this week’s podcast, he tells Róisín about his unusual life, his friendship with the Dalai Lama, the “strange and special” belief in reincarnation and why he refers to himself as “the lazy lama”.

Ringu Tulku Rinpoche’s most recent visit to Dublin was organised by Bodhicharya Ireland, the Irish arm of Bodhicharya International, a not-for-profit educational and cultural association.

The organisation is raising funds for the Rigul Trust Fund, to assist those affected by the recent earthquakes in Nepal.

To find out more, or to donate, visit their website.