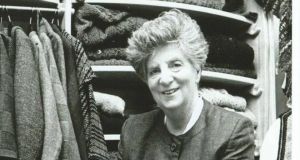 Kitty Joyce, who has died aged 84, was the owner of Cleo, one of the oldest surviving family-run shops in Dublin, famous for its earthy Irish knitwear and tweeds.

Established by her mother, Kathleen (Kit) Ryan in 1936, its business built up during the 1930s and 1940s, flourished in the early years of US tourism in Ireland in the 1950s and 1960s and was further developed by exports to the US and later the cultivation of European and Japanese markets.

Passionate about the preservation and promotion of Irish heritage homespuns in natural fibres like linen and wool, Kitty was devoted, like her mother, to encouraging both tradition and modernity and she gave an identity and status to her knitters and weavers, particularly talented craftworkers like Maggie Dirrane on the Aran Islands, who created the famous crios hat.

In her recently published history of Cleo, Hilary O’Kelly of NCAD points out that its crafts were nurtured as much for their creative as their social value – Kitty regarded what she sold not as “product” but as the work of “gifted makers”.

Following her marriage to Bryan Ryan, also from a farming family, she acquired a shop called Cleo in Grafton Street, later moving to the basement of a Georgian building in Molesworth Street.

Kitty began training as a nurse in 1949 but eventually quit her studies to help her mother “and a love affair began”. She would travel up and down to Galway sourcing shawls, bainin jackets and knitwear for the shop. Her children remember that even family camping holidays always had a business agenda.

Well known for fastidious quality standards and also for her then advanced ideas about healthy eating and organic food, Kitty found new markets in the US. She had married Tom Joyce in 1961, a farmer from Mayo living in Dublin, and was rearing a growing family of six in Mount Seskin in Saggart as well as running the shop. It was Tom who encouraged her to buy the Kildare Street premises close to the Shelbourne Hotel in 1974 for £45,000.

She is survived by her husband, Tom, daughters Mary, Helen, and Sarah and sons Bryan, Mark and Stephen.