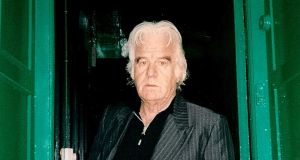 Reginald Gray, who has died aged 82, was a portrait painter whose sitters included Francis Bacon, Samuel Beckett and Brendan Behan. Among the subjects of his many other portraits are Juliette Binoche, Helena Bonham Carter, Garech de Brún, Rupert Everett and Harold Pinter.

His work drew praise from the outset. Critic, and later director of the National Gallery of Ireland, James White wrote in 1953: “Reginald Gray has the unmistakable mark of integrity, he will not rest content with a borrowed image, but seeks for a unique and personal vision, the aim of all great artists.”

In 1962 James Burr wrote in Arts Review : “It is rare today to find a young painter whose visual language has grown out of the formal austerities and induced linear precision of the 15th century; this is a decade where painting is ferociously impulsive and dominated by abstraction so that the calm objectivity and direct reaction to the visual world of Reginald Gray comes as a relief from a rapid indulgence in manipulating material.”


Set designer
Reginald Victor Gray was born in 1930, the son of Percival Gray and his wife Elsie (née Bentley). His father was a laboratory assistant at the Guinness brewery and the family lived at Carysfort Avenue, Blackrock, Co Dublin. He studied art at the local technical institute and National College of Art, later quitting the college to study under Cecil Ffrench Salkeld.

He exhibited work at the Dublin Painters’ Gallery and with the Irish Exhibition of Living Art. He also designed sets for the Pike and Gate theatres and the Globe theatre company.

It was through Cecil Ffrench Salkeld that Gray got to know Brendan Behan, who married Salkeld’s daughter Beatrice. He was the best man at their wedding, but was not allowed to sign the register as he was a non-Catholic. Sacristan Joe Doyle, who later became a Fine Gael TD for Dublin South East, instead put pen to paper.

Gray had a studio in Leeson Street, which he had to leave after he fell behind with the rent. In 1957 he left Dublin for London, where he shared a flat with a group of Irish actors including Donal Donnelly and Charlie Roberts.

He married Catherine Hall in 1958. Two years later he held his first solo exhibition at the Abbot and Holder gallery. It was well received and led to a joint exhibition, with Aubrey Williams, in New York. A second London show resulted in introductions to, and portraits of, Samuel Beckett and Francis Bacon.


Worked as a subeditor
He subsequently became associated with the School of London led by Bacon, Lucian Freud and Frank Auerbach.

His marriage having failed, in 1963 Gray decided to go to Paris. A stop-over at Rouen, to view the cathedral, turned into an 18-month stay. He exhibited in a local gallery, but good reviews did not translate into sales, and he briefly became a pavement artist.

Arriving in Paris in 1964, he found accommodation with Hungarian sculptor Lazlo Szabo and exhibited at the Daniel Casanova gallery. After three years he moved to the Left Bank.

Working as a subeditor at the Paris edition of the New York Times , he made drawings of personalities who were being interviewed by the paper’s journalists. These included singer Jacques Brel, sculptor Alberto Giacometti and philosopher Jean Paul Sartre.

He subsequently worked as a fashion photographer for five years, covering collections in London, Milan, Paris and Rome, some of which he also filmed for television. Gray also directed an experimental film, Jeu , which was shown in competition at the Cannes film festival in 1975.

In the 1990s he lived in the Chateau de Ravenel, 50 miles north of Paris. He taught painting on a part-time basis and in 1996 directed and designed the setting for Phillipe Alkemade’s Letters from Ireland for an Irish tour. From 2002 he divided his time between London and Parisbut continued to exhibit throughout his life. His work is included in public collections in Ireland, UK, Australia and Brunei.

In 1993 a retrospective exhibition was held at Unesco, Paris. He was elected a member of the American Society of Portrait Artists in 2002 and was awarded the Sandro Botticelli prize for portraiture in 2006.

Derry O’Sullivan, poet and friend, said of him: “A true Renaissance figure has gone, but has left a wealth of memories.”

He is survived by his son Terence, daughters Deirdre and Eleonore, companion Doina, and grandchildren.

Overseas? Everything you need to know about returning to Ireland during Covid-19
9

From Marianne to Claudia Winkleman: The rise of the lockdown fringe
Real news has value SUBSCRIBE