Portrait of war: Absolution and ‘the perfect death’ on the Rue du Bois

The incident surrounding a famous Irish painting of the First World War is remembered in France. Video: Ronan McGreevy 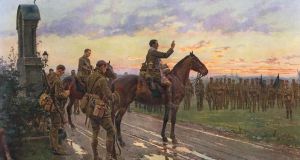 The Rue du Bois is a long road that runs through the heart of French Flanders. This is prosperous agricultural country, semi-rural for the most part. Behind the neat red-brick farmhouses that line the road are vast fields of wheat, potatoes, onions, sugar beet and green beans as far as the eye can see.

Here is some of the flattest terrain in Europe, leavened only by the whitewashed memorials to the the first World War. At one end of Rue du Bois is one that remembering nearly 5,000 Indian soldiers. At the other end is Le Touret memorial to 13,402 British soldiers who were killed in the first year of the war and have no known grave.

With so many reminders of the first World War, the unsuspecting traveller is unlikely to grasp the significance of a lay-by and council depot where mounds of sand and gravel are kept behind a green gate.

Fortunino Matania was not even there when he painted The Last General Absolution of the Munsters at Rue du Bois. Neither was the novelist Jessie Louisa Rickard. But these two artists conjured up a powerful reminder of war, something that had more than verisimilitude.

The conflict was just nine months old when the 2nd battalion of the Royal Munster Fusiliers marched out to battle on the evening of May 8th, 1915. The battalion had already been decimated twice, once at Étreux on August 27th and then at nearby Festubert before Christmas 1914.

At the head, on his horse, was the battalion’s much-loved chaplain, Fr Francis Gleeson, a Jesuit priest from Co Tipperary. He was only 31, a nationalist and Irish speaker, yet he did not hesitate to accept the equivalent rank of captain in the British army when war broke out.

Despite the horrors they had already seen, the men were in good spirits. “The scenes of enthusiasm are outstanding,” he wrote in his diary.

The men were resolute Catholics, and the constant presence of death made them an “army of prayers”, according to one of their number. “I have seen sights, but the faith, piety, and sincerity of that congregation, each man knowing that death was staring him in the face, would make anyone in this world proud to be a Catholic,” remembered Sgt James Leahy.

Hit by a shell

As they marched down the Rue du Bois towards the British trenches, Fr Gleeson spotted an exposed altar at a lay-by. There is “no stopping-place more holy than a wayside shrine”, Rickard wrote in her account. It was not a wayside shrine, however, but the shattered remains of a roadside family church, the Chapel of Notre Dame de Seez, which had been hit by a shell in the early part of the war.

The men halted. Fr Gleeson walked up and down the ranks giving what comfort he could to the 900 men of the battalion, reminding them of the honour of their regiment. Then, sitting on his horse, he gave the men general absolution.

The silence was broken by the men singing Hail Glorious St Patrick, before dispersing to march 1½km to the assembly trenches, which were to the left of the Cinder Track, a lane way parallel to the Rue du Bois that led to the German lines.

The Munsters would be in the vanguard of what was then the biggest British assault of the war on the Western Front.

The Battle of Aubers Ridge was a catastrophe for the British, who suffered 11,000 casualties in a single day. “It had been a disastrous 15 hours of squandered heroism, unredeemed by the faintest glimmer of success,” wrote Alan Clark, whose book The Donkeys did much to establish the reputation of the ordinary British soldiers as “lions led by donkeys”.

The British commanders had gambled on a short but furious artillery bombardment softening up the German lines sufficiently for the infantry to push through and take their ultimate goal. That goal was what passed for high ground in the area: Aubers Ridge. But there weren’t enough guns and the ones that were available were worn-out, inaccurate and totally unsuitable to demolishing the German defences, which were 30ft deep in places.

When the bombardment ceased, many of the frontline British infantry had already crept into no man’s land. They provided a pitiful sight for the German infantry, who were forewarned about the attack.

“There could never before in war have been a more perfect target. There was only one possible order to give: ‘Fire until the barrels burst’,” one German officer remembered.

The Munsters were one of the few battalions to make it into the German trenches. One officer was heard shouting “come on the Munsters!” as his men breached the German parapets. He was shot down a short time afterwards.

Lieut Col Victor Rickard, the commanding officer of the battalion and Jessie Rickard’s husband, was shot through the neck just after he left the trench. He died immediately. A total of 151 Munsters died at the Battle of Aubers Ridge, according to the author Jean Prendergast, who has written the definitive history of Rue du Bois. One in six of those who had lined up for general absolution the previous evening died in the battle, and 220 were injured.

Jessie Rickard, now left a widow with a two-year-old child, wrote the story of the absolution in remembrance of her late husband. Despite her grief, she was in no doubt that he had died in a good cause. It was, she wrote, “the perfect death. No one who knew him could ever doubt that he would have chosen any other end than to die leading the regiment he so loved all his life.”

The birth of the painting

Her evocative words were first published in New Ireland magazine in 1915 and picked up by the Sphere magazine in 1916. The Sphere was a beautifully produced and hugely popular periodical of the time, which circulated in Britain and Ireland. It employed Matania, an illustrator of genius, to turn Rickard’s words into a painting.

Inspired by Rickard’s words, and using a description given to him by Sgt James Meehan, one of the few who made it into the German trenches and lived to tell the tale, Matania turned his prodigious gifts into a painting of extraordinary emotional power.

Here were Irish Catholics led by an Irish Catholic priest, but in British uniforms and fighting in France. The painting shows the complexity of Irish identity in a time before only one version of Irish history became acceptable.

For decades, the site of the absolution was lost. The chapel that replaced the original on the site was levelled to make way for a road-widening scheme. Only for the diligence of one local man, Michel Knockaert, working from old maps and historical accounts, it might never have been found.

After extensive negotiations, a memorial will be unveiled tonight on the exact site where Fr Gleeson gave his last absolution. It has been a long road for all concerned.

Conor Pope: My first parkrun and it was mortifying
6

Expert tips: A podiatrist on footcare
9