Poet, linguist and well-known seller of the ‘Big Issue’ 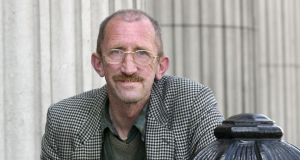 Paddy Finnegan, who has died suddenly in his adopted home city of Dublin aged 71, was exceptionally learned, and an acute observer of the world.

Finnegan made an impact as a poet, as Gaeilge and in English; as a bus conductor operating out of Donnybrook bus garage; as a long-term student of UCD who never graduated but enriched the lives of many who met him; and, in later years, as a seller of the Big Issue magazine, first outside Trinity College, then on Grafton Street.

At UCD he embarked on a degree in Irish and English, always passing Irish. It is surprising that he failed to pass English. He claimed not to have applied himself sufficiently to his studies, but he also lacked confidence.

Finnegan was learned in Latin and Greek as well as Irish and English. For all, he was modest about his talents. They resulted in his being chosen to translate Yeats’s The Lake Isle of Innisfree into Irish: and contributing to a book to mark the 60th birthday of poet Brendan Kennelly. Poetry collection He published one collection of poems, contributed to several others, and issued a number of CDs. One of his poems dealt with being barred from McDaid’s, the Dublin literary pub: “No damsels fair of exotic race/ frequent my present drinking place/ no artist Dante’s famed niche could fill/ or writer equal Johnston’s quill.” His poems suited declamation in his gravelly east Galway accent.

Patrick Joseph Finnegan was born in Dereen, near Kilkerrin in east Galway, on the last day of 1942, third of five children to Michael Finnegan and his wife Mary (née Kelly). In his youth, he knew older locals who were native Irish speakers.

He was educated at the Franciscan Brothers’ National School in Kilkerrin, then won a scholarship to St Jarlath’s College in Tuam, where he excelled academically.

After school, he worked as a civil servant and a bus conductor with CIE Dublin City Services (now Dublin Bus). His exploits passed into the folklore of Dublin bus workers.

Selling the Big Issue was the nearest he came to a career suiting his talents. He was a prodigious seller, first outside Trinity College and then on Grafton Street.

He stood silently, holding the magazine aloft. He explained: “I do not cry my wares. I do not compete with the internal combustion engine and the other unpleasant street noises ... there are enough lunatics, winos and gobbaloons roaring and shouting to themselves. I should not like to be confused with one of those.”

Those who knew him would never have made that mistake.