Patrick Logue: How to explain Gaelic football to a foreigner

Our Spanish student, Pablo, knows nothing about the Gaaah. So I try to fill him in . . . 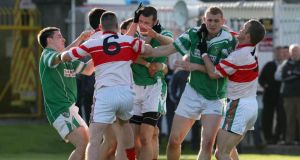 Sometimes it gets out of hand and the teams start fighting, or as the TV commentators say, ‘passions run high’. Photograph: Donall Farmer/Inpho

‘Why have they got gumshields?” Pablo, our Spanish student, asked before the start of a three-way under-11s blitz featuring St Fechin’s of Termonfeckin, Hunterstown of Ardee and Glen Emmets of Tullyallen on a recent Monday night.

“The kids playing Gaelic football have to wear gumshields to protect their teeth. They might get their teeth knocked out otherwise,” I say, to the sound of Pablo’s jaw hitting the hallowed Fechin’s turf. “Also, it’s an insurance and health-and-safety thing,” I add, but mumbling only to myself. How could you translate that in plain English?

In fairness, he’s from Madrid and knows nothing about the Gaaah. Unlike those of us who were inflicted upon the local team from a young age, in my case St Patrick’s GFC of Stamullen, Co Meath. Hon the Pats, pride of the parish. I knocked over the odd (very odd) point for the Pats in my day, but didn’t much like the rough and tumble of it and came home many a night with a perfectly clean jersey.

As Pablo picked up his jaw and we ventured towards the pitches, I set about trying to explain the dark arts of Gaelic football to somebody from a country where the only real ball sport is one played on the ground, with feet, and also with lashings of delicacy, beauty and precision. It is played by tanned young men with long manes and manicured facial hair. It’s a far cry from the Pats on a wet evening in June.

As the games started, my lad Darragh seemed to have put on the Ardee team’s red jersey over his local green and white hoops. “He’s playing for the other team because they only have seven and we have 11,” I explain. Jaw drops again.

So what are the rules? I do my best, from memories of stomping around the turf in Co Meath and the odd trip to Croke Park when Meath used to beat just about everybody, and more recently to see them cheat Louth out of victory in the 2010 Leinster final. Everybody changes.

Kick it over the bar for one point, into the goal for three points. There are 15 players on each side during a full match. You must tap the ball with your foot as you run or bounce it every second time, but never twice in a row, unless you haven’t quite caught it. I probably have that wrong: there will be letters. You must put your toe under the ball to pick it up, or at least look like you are doing so. A suggestion of it, as long as you are quick and the ball is moving a little, is grand. Ladies teams don’t need to use the foot to pick up the ball as women are presumably not as skilful. I know, there will be letters.

You can tackle a player using one hand at a time. With that one hand you can assault the ball repeatedly, and if the other player gets in the way, well so be it. Fifteen players each using one hand to tackle one player is grand too. The tackle action is highly skilled, although if you squint it can resemble a full-on mill in Temple Bar on a bank holiday Sunday night, I tell Pablo, promising to explain Temple Bar and binge-drinking later.

Sometimes it gets out of hand and the teams start fighting, or as the TV commentators say, “passions run high”. This is also known as a “shemozzle”, loosely translated as a fight that’s no big deal.

I move on to the unwritten rules of Gaelic football, which are taught from a young age. You can “run off” any pain inflicted on the pitch. “Coach, my femur is protruding from the leg in an agonising fashion,” you might say. “Run it off,” might come the reply. Medical research, how are ye?

Gaelic football is very definitely “not soccer” and don’t forget it. Any attempts to mimic soccer are frowned upon. “Pick it up, it’s not soccer,” can be heard regularly, aimed at the kids as they take a dream run, cut through the defence and head for goal.

In front of the open goal, amid some sideline encouragement, they may realise the error of their ways, pick the ball up and knock it over for a point rather than bury it. This is also because everybody knows the other unwritten rule in football: take your points and the goals will come. But not too many: that would be too much like soccer.

“Is this only played in Ireland?” Pablo asks. “Yes,” I say. “Well, sort of.” Cavan recently beat London 2-22 to 0-11. Yes that’s “County” London. There are a lot of Gaelic fans in other countries and they often wear their county jerseys while drinking in bars.

Then I move on to hurling. It’s a bit like the football, but the ball is smaller and the players have sticks. Pablo looks confused. He politely says he thinks the Gaaah looks good, but I can tell he thinks it all looks a little crazy. I figure it’s best not to tell him about the four men in white coats who stand by the goals during the big matches. Twitter @paddylogue Michael Harding is on leave