Our Wedding Story: The bride drove a Ferrari

Fidelma Butler and Robert MacNamara: ‘It’s the first time they’ve had a bride drive herself to her wedding reception’ 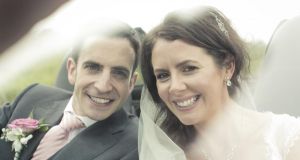 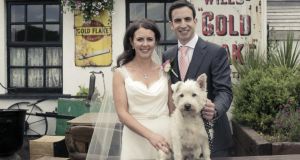 Robert, from Celbridge, Co Kildare, who works in corporate banking, and Fidelma Butler, a HR director from Bray, met in 2008 through mutual friends (now married themselves and members of the wedding party) in what was then Ron Black’s on Dawson Street.

Rob proposed during a holiday in Florida in November 2013.

“As a sports fanatic, Rob wouldn’t get married in an even-numbered year due to the Olympics, World Cup and European Championships,” laughed his new wife.

On June 27th, 2015, the bride – in a Naomi Neoh dress from Ivory & Pearl in Comber, Co Down – drove herself and her sister Orla, one of the bridesmaids, to St Patrick’s Church in Glencullen (her grandfather was involved in the building of the altar) in a Ferrari borrowed from a neighbour.

Her father travelled in a car with the other bridesmaids, Gillian Burke (who also made the cake) and Gráinne Hickey, and walked his daughter up the aisle.

Fidelma and Robert were married by Msgr Donal O’Doherty who had married her parents, Fidelma and Philip Butler, 45 years ago. Appassionata String Quartet played music throughout the ceremony.

The groom’s favourite part of the day happened after the ceremony when he and Fidelma were greeted by her terrier Alf – in an outfit by Puddle Jumper Pups bought on Etsy.com – and the three walked up the road to Johnny Fox’s pub for refreshments with their guests in the Hooley Room.

And the bride’s favourite part? When she whisked her new husband off to Carton House Hotel in the Ferrari.

“It’s the first time they’ve had a bride drive herself to her wedding reception,” she said.

Music on arrival was by the couple’s friend Shelly Jeffares on the harp. After dinner, The Beat Boutique and a DJ by Funky Functions took over.

The first dance was to Frankie Valli’s Can’t Take My Eyes off You, followed by Bobby’s Girl by Marcie Blaine.

“The one thing that went wrong was that I left my speech at home but thanks to some quick-thinking friends and neighbours, it all worked out and adrenalin and ad-libbing got me through,” said Fidelma.

The couple mini-mooned with Alf in Castle Leslie and are planning a trip to Hawaii later this year, stopping by San Diego for an American football game.