Knots were tied at ceremonies recently in Waterford, Athlone and Galway 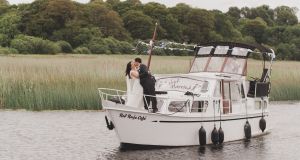 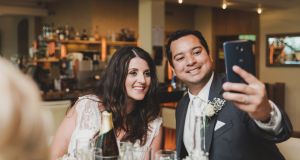 Leah, a teacher from Athlone, moved to Canada five years ago. She planned to stay for only a year but after meeting James, from Vancouver, at a friend’s party decided to stay put.

James’s mother is Malay-Chinese and his father’s family is from Goa, in India, but he grew up in Tanzania. His parents met in the UK and moved to Canada, where James was born.

James and Leah went ring-shopping in Seattle but Leah’s students and her aunts, “thought that we needed a more romantic story for our proposal so we went skiing and pretended to get engaged in the snow up on the local mountains in Vancouver. Long story short, we ended up on the evening news in Canada for the ‘proposal.’”

On August 8th, 2015, they were married in St Mary’s Church in Athlone and had a reception afterwards at Glasson Golf and Country Club.

The bride’s uncle Matt Scally rushed the bridal party from the Fletcher house to the church that morning and another uncle, Tom McGuire, drove the newlyweds around Athlone for 30 minutes while beeping the horn of his car.

Leah’s parents Paul and Jenny have a boat crew called the River Rats and the wedding party went from Coosan Point to Glasson Golf and Country in a convoy of 12 boats.

James and Leah were in the lead boat, “all decked out with wedding decorations. It was a windy day with sideways rain and choppy water, but that made things great.”

That night’s session went on until 6am – after Leah’s cousins carried a piano down a flight of stairs to the residents’ bar. The newlyweds, who live in Vancouver, honeymooned in Italy.

And the winner is... Yes, it’s time for the prestigious Car of the Year award
3