Our Wedding Story: A fragrant repeat of history 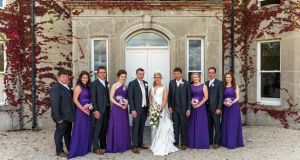 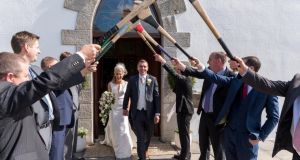 Terri McVeigh (29), a doctor in Our Lady’s Children’s Hospital, Crumlin and a researcher at NUI Galway with Breast Cancer Research, was at a classmate’s wedding in 2010 when she met cousin-of-the-groom Paul Devitt (35), a technician from Lahinch, Co Clare.

On the morning of August 29th 2015, Terri’s uncle Patsy McVeigh set off with the four bridesmaids from the McVeigh home in Tourlestrane, Co Sligo. They were followed by Paddy McVeigh, who drove his granddaughter to St Attracta’s Church where her father, David McVeigh, walked her up the aisle.

The bride’s parents were married on the same weekend 30 years before and she carried the same flowers in her bouquet that her mother Nora had in hers. Florist and family friend Bríd Fallon arranged flowers for both weddings.

The newlyweds hosted a reception for 250 guests at Castle Dargan Hotel.

Terri’s grandparents, Paddy and Ethel, brought up the gifts during Mass and her brothers Pádraig, Colm and Seán did the “general running around fetching bits and bobs”.

Friend Bernard Guthrie organised the design and printing of the invitations from Officepro, in Ballina, Co Mayo.

The bride’s sister Una McVeigh printed the table names and created favours for the tables. Mary White, of Mary White Millinery, crafted Terri’s headpiece and her dress was from Belladonna in Galway.

The bride’s mother arranged a frame with photos of late family members and friends, including Paul’s mother Mary who passed away when he was 17. His father is Michael Devitt.

Michael Harding: The woman at the checkout said my mask made me look constipated
10

Tell Me About It: ‘Why am I the one always left alone?’
Real news has value SUBSCRIBE