Our wedding story: A Caribbean engagement and a Killarney wedding 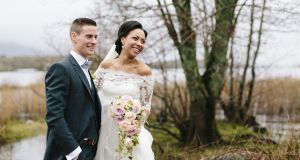 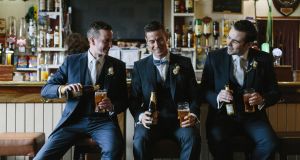 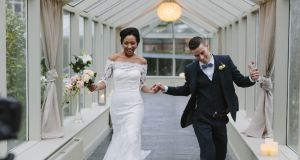 Melissa, from Cork, and Kerry man Richard met 10 years ago as students at CIT.

“I knew Richard was the one when he picked me up on a yellow BMX for our first date,” says Melissa, a retail store manager.

The couple got engaged during a Caribbean cruise two years ago and were married on February 26th, 2016, in St Mary’s Cathedral, Killarney.

The bride, whose mother is Bridget Murphy, wore a dress from Áibhéil in Adare, Co Limerick, and was accompanied by her sister Lorna O’Riordan, chief bridesmaid, and her two college friends Anneka and Amy.

Melissa’s five-year-old niece Holly was the flower-girl and nephew Sean (3) was pageboy alongside six-month-old Conor.

Keith, the groom’s cousin and best man, flew home from Canada for the wedding. His girlfriend couldn’t make the trip but watched the whole ceremony live on the cathedral’s website. The groomsmen were Richard’s brother David and lifelong friend Darren. The groom’s parents are Geert and Marie Maes.

The decision to get married in Richard’s hometown was an easy one.

“From day one of planning we knew the wedding would be in Killarney. Richie loves his hometown and still cycles with the Killarney cycling club so we try to get down as much as we can,” says Melissa.

The reception was at The Malton Hotel and the newlyweds’ first dance was to All of Me by John Legend.

“All week the weather was absolutely fab and on the day of the wedding it rained all day. It didn’t stop us, though,” laughs Melissa. “I toddled through a few muddy puddles, got windswept hair and was absolutely freezing, but enjoyed every moment. What’s the point if you can’t have a little fun?”