A pioneer in assisted reproduction who helped many couples to babies 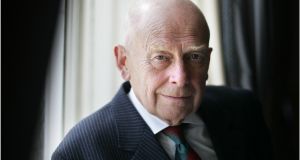 Prof Robbie Harrison, who has died aged 76 from pancreatic cancer, was a pioneer in the field of assisted reproduction in the Republic. A gifted teacher and researcher, he will be fondly remembered by many for fulfilling their dream of having a baby having faced the challenge of infertility.

In the view of Dr Peter Boylan, current chairman of the Institute of Obstetricians and Gynaecologists, “his greatest legacy is the many, many couples to whom he brought great joy by introducing in vitro fertilisation (IVF) into Ireland”. He achieved this notwithstanding many social, political, economic, and religious challenges. Being conscious that not all couples could afford expensive IVF treatment, he ensured the service was available to people of limited means.

Born in Mansfield, Nottinghamshire, in 1940, in war time, Robbbie’s early years were spent sitting beside his mother, who was a volunteer ambulance driver. He was brought up in Liverpool where his father Fred was a GP in Aigburth. His mother Ellen (Nelly) was a primary school teacher.

He became a fluent French speaker after being sent to France as a teenager to recuperate from tuberculosis.

He came to Dublin to study medicine at the Royal College of Surgeons in Ireland (RCSI) in the early 1960s.

After qualification in 1967, he did the usual house jobs before beginning training in obstetrics and gynaecology. Registrar posts in the Mater and St Luke’s hospital were followed by a move to Queen Charlotte’s hospital in London to work as a specialist registrar, with a particular interest in fertility.

Having gained membership of the Royal College of Obstetricians and Gynaecologists and an MD, he returned to Ireland as associate professor of obstetrics and gynaecology at Trinity College Dublin.

He practised gynaecology at Sir Patrick Dun’s hospital and obstetrics at the Rotunda. The Trinity unit subsequently moved to St James’s hospital and in 1990, he was appointed full professor and head of department at the RCSI, moving back to the Rotunda.

As a teacher he is fondly remembered for his inimitable style. Medical students were in turn mesmerised and captivated but left in no doubt that success in “finals” would be hard earned.

He never lost his love of a good party. Invariably first on the dance floor, he was known for singing a mean version of Johnny Be Good. Liverpool Football Club was the focus of a life-long passion for “footie”.

Robbie was married first to Caroline, the mother of his four children, who predeceased him, and latterly to Mary Lloyd, whom he met in 2011 and married two years later. He appreciated how lucky he had been in love. He and Mary enjoyed over five years filled with travel and adventure together.

He is survived by Mary, his children Peta, Robert, Sinead and Charlotte, and by five grandchildren.

Aortic dissection: Getting to the heart of the matter
3

‘Moving to Ireland was the best decision I ever made’
10