One of Ireland’s most successful property developers 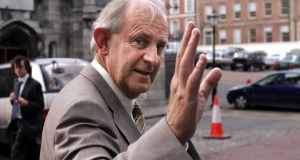 Owen O’Callaghan, who has died aged 76, was one of the State’s most successful developers, and one of the few to survive the property crash.

Born a few miles west of Cork, he reshaped his home city over four decades with a succession of major commercial, retail and housing developments.

However, he became embroiled in controversy during the long-running planning tribunal investigation into corruption in Irish public life (known as the Mahon tribunal).

It found that O’Callaghan made payments to a number of Dublin councillors in return for “their continued support and assistance” in rezoning land in the capital. It also did not accept he was unaware of the corrupt activity of ex-Fianna Fáil lobbyist Frank Dunlop in paying councillors to back the rezoning at Quarryvale in west Dublin. He vehemently contested the tribunal’s findings about him, but lost a High Court challenge to have them overturned. The Supreme Court is due to hear his appeal to this decision later this year.

Ironically, other legal actions taken by O’Callaghan against the inquiry indirectly led to the unravelling of many of its findings. So while his own challenge to the tribunal failed, other prominent figures succeeded in having their corruption findings overturned with the help of background documents secured on foot of his legal cases.

The Liffey Valley shopping centre in west Dublin, which was built at Quarryvale, was by far his largest project. Jointly developed in the late 1990s with the Duke of Westminster’s Grosvenor Estates, it has since been sold on.

Born in Ballincollig, O’Callaghan was educated at Presentation College, Cork and Farranferris College. He qualified as a chartered quantity surveyor in 1964 and went to work with a local engineering firm, later becoming a Fellow of the Chartered Institute of Building. In 1969, he formed a building company with his brother Jack, focusing on housing construction in Youghal and Cork city.

The following year, he established O’Callaghan Properties which was to become one of the most successful privately owned property development companies in Ireland.

He transformed the physical landscape of Cork city over the past 40 years, building some of the most significant commercial, retail and housing developments. They include the Opera Lane, Half Moon Street, Merchants’ Quay, plus the North Main Street, Lavitt’s Quay and Paul Street developments, as well as Mahon Point on the city’s eastern outskirts. He enjoyed strolling around Cork city at lunchtime, on the lookout for prospective sites, and had an intimate knowledge of the maze of narrow lanes and winding streets so characteristic of Cork.

Further afield, he built the retail outlet at Arthur’s Quay in Limerick and the Golden Island shopping centre in Athlone.

It is estimated that 10,000 people are working in Ireland in projects developed by O’Callaghan. O’Callaghan Properties has also built more than 7,500 houses since 1969.

During the recent recession, he focused on London, developing projects in Waterloo, Clapham, Putney, Hammersmith and Bermondsey. At present, his firm is awaiting planning permission for a major Cork office development on Albert Quay.

In tribute to his achievements, the Lord Mayor of Cork, Des Cahill, described him as “visionary” and a man who had contributed so much to the life of his native city. An unassuming man, his success as a businessman never got in the way of a friendly, approachable and generous disposition. He was a discreet but generous supporter of the arts in Cork.

In parallel with the construction of Mahon Point, he set up and oversaw a job training initiative that brought together the developers, Fás, the Mahon Community Association and key retailers including Tesco, Debenhams, and Next.

Aimed at maximising local take-up of employment and targeting the long-term unemployed, the courses were based in the Mahon Community Centre. An employment and training centre was established there in offices developed by O’Callaghan, who chaired the project.

According to Fás, more than 350 people trained in basic keyboard and computer skills, construction know-how and for the catering/hospitality sector. The majority were placed in jobs, reflecting an almost 80 per cent placement rate of those who took part in the scheme.

Owen O’Callaghan is survived by his wife Shelagh, son Brian, daughter Zelda, sister Gene and brother, Jack. He is predeceased by his youngest daughter, Hazel, who died in an accident in 2002.