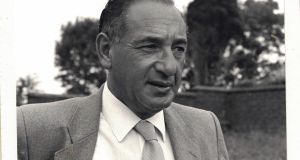 Fred Rosehill: “I am an Irishman, a Corkman, and a Jew.”

Freddie Rosehill, who has died at the age of 89, was the oldest and one of the last remaining members of Cork’s once flourishing Jewish community.

Earlier this year, as chairman of the local Hebrew congregation, he oversaw the de-consecration and closure of the city’s only synagogue.

It was closed, as he explained at the time, not only because of shortage of money, but because the community could no longer muster 10 men, each over 13 years of age, as required to make up a Jewish religious quorum.

The closure of No 10, South Terrace on a raw February day marked the end of a community which, at its peak, consisted of up to 500 people in 65 families.

Starting as peddlers or vicklemen (Yiddish for “weekly”, the time it took to complete a door-to-door round), within two generations they were tuning pianos, establishing companies and becoming doctors, dentists and solicitors.

In the 1930s, Cork had two Jewish football clubs, a table tennis and debating club, a branch of the Zionist youth movement, a Jewish butcher and a burial society.

In 1977, the solicitor and politician, GY Goldberg, became the first Jewish lord mayor of Cork.

But as Fred Rosehill watched his grandsons, Daniel and Harry and Max, carry the sacred scrolls of the Torah in a ceremonial prayer service when the synagogue closed, he expected them to join the continuous exodus of Jews from Cork – not because of lingering anti-Jewish sentiments, which seem to have vanished, but in order to better themselves.

Rosehill was born on MacCurtain Street, Cork, in the heart of the city.

The family also lived on leafy Donovan Road, beside the university, before moving to Ovens, a few miles west of the city.

He was educated by the Presentation Brothers who, aware of the importance of the Sabbath to Jews, let him off on Saturdays to attend the synagogue.

In his late teens, he decided to become a doctor.

It was a time when successful families were sending their sons and daughters to university.

But, three years into the course, he left University College Cork (UCC) after the death of his brother, Eric, opting instead for a life in business as a travelling salesman for a company run by Rosehill’s family.

It is somewhat ironic that some of his best-selling lines were holy pictures that he sold to Catholics.

Going into the picture-framing business, he ran a company which the Rosehills had acquired from the Marcus family, also Jewish and with literary and TV associations. The Rosehills also opened a successful toy store.

If the first wave of Jews, who arrived in Cork from Portugal in 1772, disappeared because they were assimilated by marrying into Protestants families, the next wave, fleeing pogroms in White Russia (Lithuania) in 1891, retained their identity.

Apparently destined for the US, they got off the ship in Cobh, seemingly confusing Cork with New York.

But their descendents, successful professionals, began leaving Cork in search of a more active Jewish life and greater opportunities.

Alarmed as families left in droves, leaving yawning gaps in the congregation, Rosehill started “importing extras” from the UK, in the form of trainee rabbis, in a bid to achieve a quorum and keep the synagogue going.

By the time it closed, of the original 65 families – only the Rosehills remained.

Unsettled after the death of his wife, four years ago, Rosehill travelled widely but returned to Cork because, as he said: “I found myself a stranger in London, in Tel Aviv and in Florida. There was only one place. I was born and bred here. I am an Irishman, a Corkman, and a Jew.”

Predeceased by his wife, Patsy, Freddie Rosehill is survived by his daughter, Claire, son, Michael, grandchildren Daniel, Deborah, Harry and Max, and by his life-long friend, Barrie.