Irish comic Maeve Higgins used to play a game called ‘American Dream’ during her school days. Now she’s living it in one of America’s most iconic cities 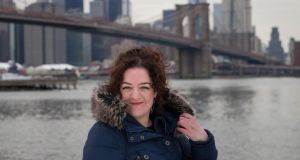 In my school, the girls used to play a game called “American Dream” where they held their breath until they passed out. They got in a lot of trouble for it, both respiratory and parental.

My version of “American Dream” was different: it involved me imagining myself (breathing in and out the whole time) living in New York City. The dream was a fuzzy thrilled mess I’d created out of films and books. Back then, New York was no more real than any idea, an abstract place in a glowing future where I’d have ambition, adventures, a bunch of sardonic friends, a series of tragic romances and bagels, lots of bagels.

When I moved here, I began trying to figure out what New York truly is, deciding what to believe, learning how to actually be here. My first clue comes from Grand Central, a Billy Collins poem printed small on the back of my subway ticket. It begins ‘The city orbits around eight million centers of the universe.’ I think – that’s it! New York is people.

I wander around Battery Park, looking out at the ferries crossing the Hudson to New Jersey. The Statue of Liberty has her back to me but I don’t take it personally. I see One World Trade Centre, still under construction and obscured by a heavy mist, but still formidable, gigantic.

I look at all the people on the street and am about to get into a condition I call “Maudlin Maeve” when I suddenly see an old school friend, walking down Murray Street with her brand new baby.

Delighted by the coincidence, (I’m speaking for myself, Gemma seemed . . . confused? Dismayed?) we have tea in her apartment and I admire the baby. She’s an extremely cute baby, in fact the only way she could be cuter is if she had had big gold hoop earrings on.

I leave Gemma’s building and realise that my phone is dead and I don’t know how to get to my show. I start to panic, until I remember an old trick my forefathers used – they would take their headphones off and ask other humans the way.

I bundle onto a bus that says “Crosstown” and find a seat beside an old lady who is all wrapped up in a huge pink scarf, chenille. I ask her if the bus will take me to the Village. Her reply is muffled and musical. “It sure will, Baby.” I wish I was her baby – I’d follow here everywhere and make her cuddle me non-stop.

The bus is warm and travels slowly along 8th avenue, rocking slightly, making me drowsy. I look out the window as rickety noodle bars give way to solemn court buildings and think about the last time I was on a bus, back home in Ireland. Not in a misty eyed way, it was only three weeks ago.

It was the bus from Cork to Castletownbere, except it was Tuesday so the bus only went as far as Glengarriff. I’d asked the driver if there was another bus that would take me the last 30 miles to Castletownbere. That’s when he said, Zen like, “I am the bus”. Then he recommended hitchhiking the rest of the way, which I did.

After the show, I go for dinner with people and we get talking about who is from where. On my right there’s a man who looks like he’s from Carlow (1990s clothes, baffled face) but is actually a Russian Jew. On my left, a charmingly drunk woman who says she’s definitely half-Korean and possibly part Native American. Opposite us sits a man from Guyana who’s married to a woman from Trinidad, via Japan.

I think about where I’m from, Cobh via Carrigtwohill, and I can’t help myself from saying: “This is so cool.” As the words hit the air, I realise how obnoxious I’m being – collecting and commenting on my companions’ ethnicity like they are an interesting new coffee blend.

The Trinidadian takes it in her stride, and saves me by saying: “You should meet this guy I dated once, Moroccan-Israeli, I mean . . . wow.” She pops her eyes and makes a hand gesture that suggests she had a great time with him. Her husband rolls his eyes. Lost for words, I high-five her and go back to my salmon.

Yesterday I was walking in the Upper West Side and heard a seven-year-old zinging a grown up. They were just ahead, carefully picking their way through the icy puddles, the man was carrying the boy’s schoolbag and a small violin case. Waiting to cross at the lights, the ear-muffed boy said he didn’t feel like practising that day. The man said: “Well, Jacob, if you wanna be great at something, you have to do it everyday.” Jacob didn’t miss a beat. “So you wanna be great at babysitting?” The man inhaled through his nose and said: “I guess so, Jacob, I guess so.”

A waitress tells me, confidently: “This is New York City – nobody eats solids.” I overhear a girl, arguing loudly on her phone in Wholefoods, end the call by saying: “I’m a New Yorker, I’m not going to be stupid about nothing.”

I meet a friend of a friend, who has offered to give me the lowdown on living here. “As a New York female I can tell you the guys here are hot, sure, but they are so lame. They are, like, Lilliputian.”

I understand she means immature, but she’s chosen the wrong metaphor and I frown. She mistakes my expression as confusion, and clarifies: “They never grow up.”

I tune out and watch a man somehow hold a toddler and two cups of coffee. He’s looking for somewhere to sit and saying “This is not working for us Sweetie, no chairs, na-ah.” The child repeats him: “Na-ah Papi.”

The New York female asks how I plan on approaching the dating scene, as if it’s a dangerous animal that’s just woken up hungry. I tell her I don’t have a plan and anyway, I’ve already been asked out. I don’t tell her that it was by an intellectually disabled man who asked me loudly and repeatedly to sit beside him on the subway so we could “talk closer”.

I go to Grand Central Station to the Whispering Gallery – an arch that you whisper into and the sound travels right across the concourse to the person listening at the corresponding pillars – but I can’t properly test it out because I’m on my own. I consider stopping one of the commuters racing by, but I don’t know if they’d appreciate my revelations.

I’ve been ignoring my credit card debt for six years. I don’t actually like bagels. I’m never quite sure what is real. Instead I look at my ticket again, at the last lines of the poem. “Lift up your eyes from the moving hive and you will see time circling under a vault of stars and know just when and where you are.” That’s exactly right, you know, because when I look up I see with total clarity that I’m not dreaming, it is now and I am in New York.

Sean Moncrieff: The thing about freedom is that it isn’t free
3

Monster or machine? Everything we know about coronavirus after six months
9