New to the Parish: ‘My father said I was too shy to be a priest’

Despite those initial reservations, and his uncle arranging a marriage for him, a Ghanaian electrician joined the priesthood and ended up in Dublin

Fr Raphael Annan from Ghana moved to Dublin in 2014 where he now works with a team of two other priests in the Kimmage and Greenhills parishes. Video: Bryan O’Brien 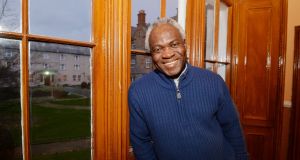 When Fr Raphael Annan first mentioned to his father that he wanted to enter the seminary, he was told he was too reserved to become a priest.

“I remember him telling me, ‘You can’t be a priest. You’re too shy and quiet,’ ” says Fr Raphael. “He said the priest’s job was to speak loudly and interact with a lot of people. He found me to be a very reserved person.”

Fr Raphael, who was born in the fishing port city of Cape Coast in southern Ghana, first considered joining the priesthood while at school. He remembers priests from the missions, or the “white fathers” as they’re commonly known in west Africa, asking him to consider following a religious life. However, the young student was unsure whether he was ready to dedicate his life to religion.

“I was hesitant because of the challenges,” says the Ghanaian Spiritan priest. “People said, ‘You want to be a priest? You’re not going to get married? That’s too demanding.’ I said, ‘Give me a chance to think about it.’ ”

When he finished school he followed in his father’s footsteps and began working in electrical engineering. He is one of 12 children and, after his parents separated when he was very young, he grew up in his father’s care. They lived in the bustling city of Kumasi, which he describes as a “mix of all the different tribes in Ghana”.

After five years of working for the electricity corporation, his father encouraged him to apply for new job within the industry. Around the same time, he went to visit a Spiritan priest, who brought him to visit a Catholic vocation centre. There he was offered the chance to begin training as a Holy Ghost Father.

“He told me they would be starting in October, and if I wanted to join I would be most welcome. I said, ‘Okay, I’ll give it a try.’ So I went back and resigned from work.”

Despite his father’s initial reservations, he was happy with his son’s decision. His uncle, on the other hand, had already made plans for his future. “When he heard he said, ‘But I’ve got somebody for you to marry.’ I said, ‘You’re joking, you didn’t even tell me you were looking for somebody for me’, so we just laughed about it.”

Fr Raphael began his training in Gambia. He quickly made friends with his fellow seminarians but he found the demands of the seminary challenging.

“It was difficult. I was not used to the discipline. It was very quiet and we had no siesta. The first person who was in charge of us was very strict. We had to follow a rigorous training but we kept on going and said, well, if that’s what the missionary life is, we’ll persevere and hold on.”

A world without God

After a year of novitiate training, where the young men were taught about the spiritual aspect of their trade, he was sent to Nigeria to study philosophy and theology.

“Philosophy was to broaden the mind and learn about different philosophies, whether they’re Catholic or Protestant. We did a lot on Marxism, Karl Marx. We learned about a world where there is no God. We learned about atheism as well.”

After ordination he spent six years working in Nigeria before returning to Ghana, where he began preaching in a large parish in Kumasi. After a few years he received an invitation to spend a month in a parish in the UK.

“It was so completely different, but I loved it. I visited again afterwards. In the summer, when they wanted to go on a break, I would come for one month.”

In 2006 he spent three months preaching in a church in Long Island, New York. He remembers the local parish priest listening carefully to his first Mass from the sacristy to ensure Fr Raphael could communicate clearly with the local parishioners.

“In the States they are very particular. If you bring someone in, the people might say they can’t hear because of the accent. He wanted to get a reaction from the people but he was happy.”

After 11 years in the Kumasi parish, Fr Raphael began to grow restless. His application for a two-year sabbatical in the US was denied, so he requested another appointment. He was sent to the UK to carry out a mission appeal for donations.

He was subsequently transferred to Ireland. Fr Raphael was initially surprised to hear Irish parishes were in need of younger priests. He remembered how the Irish Spiritan fathers in Ghana often spoke of the popularity of the priesthood in Ireland.

“During training the Irish were telling us that in every family in Ireland you had a priest, sometimes even two or three of them.”

He arrived in Ireland in October 2014 and was introduced to his new home with the Holy Ghost Fathers in Kimmage, Dublin. “Culturally, socially, the way we do things here is quite different. In Ghana the liturgy takes longer. It’s a celebration so it can go on for two or three hours. You aren’t done in just one hour.”

Before he came to Ireland, a priest in Manchester explained to him that people in northern Europe “want to move fast”. “Part of the mission training is to adapt to difference and change.”

“I know about the decline in the priesthood here. The priests are getting older so they need more young people.”

Fr Raphael works with two other priests in the Kimmage and Greenhills parishes. “The idea is due to the shortage of priests. If one of them goes, we should be able to manage the two parishes together.”

“We get along very well. All of them have been to Africa before; one was in Kenya and one was in Sierra Leone. They have a cultural understanding of me, so we work together as a team perfectly well.”

Asked how long he plans to stay in Ireland, he smiles and lets out a small chuckle.

“I’ll stay here as long as I’m needed. As a missionary, you go wherever you are needed.”