An Indian woman came to Galway in August 2014 to study before falling in love with a compatriot she met online and happily settling down in Dublin. 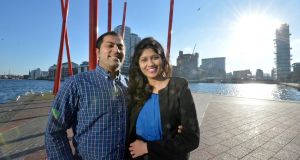 “What Ireland has given me is incomparable.” Janvi Shah with her husband, Pankaj Soni, at Grand Canal Square in Dublin. Photograph: Alan Betson

Janvi Shah used to think she would eventually move to the United States to continue her studies. However, she also wanted to forge her own path and avoid following thousands of her fellow Indian students to American shores.

“I don’t follow crowds. People from India, their ultimate aim to is to get a job in the US and stay there for life. But I want to have my identity, have my own personality. Being a woman and having your own identity is very important.”

Shah recognises the sacrifices her parents made to ensure their children had access to the best possible educational opportunities.

“They told us, ‘Whatever you want to pursue as your profession, please go ahead. Don’t think about the money.’ My parents place huge importance on education. My father had to take out an education loan to send me to study in Ireland, and I shall always remain indebted to him for this.”

Growing up in Mumbai – one of the most densely populated cities in the world – she often felt suffocated by her parents’ desire to protect her from the dangers of the outside world.

“I was always in a cocoon,” says the 26-year-old. “Whatever happened, my parents were there and never let me out alone. My father would come everywhere to drop me off like I was a schoolchild, even though I was 18 or 19 years old. I wanted to live life as it should be, not always stuck in a protected place.”

Despite that sheltered upbringing, Shah’s parents encouraged her to follow her dreams. They had defied convention in their youth by falling in love and getting married against the wishes of their parents.

“There was conflict between two castes getting married. People from two different cities, parents would never allow it. But they were firm on their decision. They weren’t going to let go.”

Shah’s dream was to follow her father into a career in banking. “My father started as a clerk and worked his way up to bank manager. He loves his bank, and that’s what sticks in me. I have those genes for banking. I was always fascinated by banks, for no particular reason.”

After completing her undergraduate degree in engineering and IT, she moved to the southern city of Mysore to work as a software engineer. She began researching master’s degrees abroad and spoke to a family friend who was living in Dublin. She decided to apply to NUI Galway to study international management.

“Initially my parents were a bit reluctant because they had no idea about Ireland. It was just a European country to them. I told them it was an English- speaking country, plus the universities were good. The biggest advantages were that it was closer to India than the US and it wasn’t as expensive. In the end my parents were convinced I was going to the right place.”

Shah arrived in Galway in August 2014 and moved into an apartment with an Irish woman and a man from Slovenia. She quickly made friends at university and through the Facebook group Indians in Ireland. One of those friends would later become her husband.

Pankaj Soni had moved to Ireland in 2002 and was working at Google in Dublin when he began chatting online with Shah.

“We started doing Skype calls. She came over to Dublin for a day. I showed her the Google building and took her to Trinity,” says Soni, who grew up in New Delhi. “I was more like a guide to her that day. I must have done a good tour because she liked me.” He smiles at his wife as he explains how the couple fell in love and how he decided to contact Shah’s father to ask for her hand in marriage.

“At the start we didn’t think it would be more than just friends. Everything happened so quickly and within a year we were actually married.”

The couple were married in Mumbai in July 2015 and held a post-wedding celebration in New Delhi. Meanwhile, Shah was working hard to complete her studies. Her parents were unable to travel to Ireland for the awards ceremony after she was selected as student ambassador for NUI Galway, and she was determined they would make the journey for her November graduation ceremony.

“It was my dream to have my parents there. It was their first international trip. It was the best thing that has ever happened to me, seeing the smiles on their faces. My father and mother were sharing all my graduation photos on WhatsApp. I also felt proud that I could pay for their whole trip with my salary.”

Shah is grateful for the opportunities Ireland has given her and says Irish people are supportive and nonjudgmental. However, she has found the process of applying for Irish visas frustrating.

The couple now live in Dublin city centre, and she works for AIB. They can commute to work in less than 15 minutes and love the Irish approach to maintaining a healthy work-life balance.

“I have friends living in the US, London and Singapore and you can’t compare Ireland’s work-life balance to any other country or any other people I’ve ever spoken to,” says Soni.

“The easy commute keeps your mood and productivity levels up. For people like us, coming from another country, this feels like paradise.”

Shah nods in agreement. “I came to Ireland for my higher education, but what Ireland has given me in return is incomparable.”