Naomi Klein on climate change: ‘This is our last chance’

When it comes to climate change, capitalism is the problem, says Canadian author and activist Naomi Klein 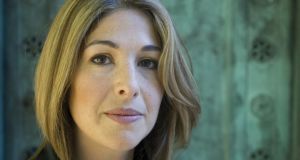 Naomi Klein: “In some ways we displace our own cares onto our kids. We’re afraid for ourselves. But it’s more acceptable to say you care about it for your kids.” Photograph: Ed Kashi.

‘It’s impossible to respond to climate change without confronting historical injustice or talking about redistribution of wealth,” says Naomi Klein. “There are lots of greens who’d like me to be quiet about that because they think it’s a secret.” She laughs. “It’s not! People know. The cat’s out of the bag.”

This Changes Everything is a rigorously calm, deeply-felt book aimed at those “who are not part of the climate conversation”. In it, Klein argues that climate change is not an apolitical issue, that it disproportionately affects the poorest people, and that the only way to meaningfully tackle it involves grassroots movements, investment in the public sphere and economic justice.

This is all a familiar prescription, if you’ve read Klein’s previous work (No Logo and The Shock Doctrine). But it’s the first time she’s applied it specifically to this issue.

“People have said this is just confirming my world view,” she says. “And there is a way that that’s true. I believe we need to have a more just society and I’d believe that even if the temperatures weren’t going up. But this research has pushed me to look much more deeply at the growth imperative. So it isn’t true that this is just reconfirming my previous beliefs. I’ve had to change in line with what I’ve learned.”

Why hadn’t she written about this before? “I wasn’t engaged because I didn’t really see a way out, I guess.”

What changed is that Klein had a conversation with Bolivian politician Angelica Navarro Llanos.

“She laid out this vision of a ‘Marshal plan for Planet Earth’. This is what all climate negotiations break down over – the call from countries in the global south for help leapfrogging over fossil fuels and to get on a different kind of development path, and the failure of wealthier countries to rise to that challenge. That justice-based response was the hope that made me want to devote some years to writing this book”

Justice has also always been what blocks progress on the climate issue, she says.

“It’s why the US didn’t ratify the Kyoto Protocol: because the Kyoto Protocol recognises that the countries that have a 200-year head-start on emitting carbon have to lead. Americans like to think that history started this morning. They don’t like taking historical responsibility. This has been compounded by the fact the Green movement hasn’t supported the global south in these demands for justice actively enough. There’s a feeling, particularly in America, that this is too controversial, too difficult to sell at home.”

So the issue has been framed as a lifestyle issue rather than a political one. Klein rejects the “message that we are all equally guilty, that ‘it’s all your fault, because you put petrol in your car’. That’s made people feel that they don’t have a right to join the climate movement unless they’re some perfect green person.”

While she believes people should make individual changes, she thinks that “if we play this game that using fossil fuels makes you a hypocrite and therefore less legitimate in criticising, that’s a recipe for a very small movement, right?

“I’m far from perfect and I openly admit that. If someone wants to point out the irony that I flew here, that’s fine.”

This Changes Everything targets the corporations, governments and geo-engineers seeking soft solutions and quick fixes, as well as the mainstream environmental organisations who enable them –most notoriously, the Nature Conservancy, which allowed oil and gas drilling on some of its protected land. Klein also tackles “climate billionaires” such as Richard Branson, who comes in for criticism for not yet honouring the pledge he made in 2006 to invest $3 billion into green energies.

Branson is the only subject of her criticism who has written to her in response, she says.

What did he say?

“He’s . . . not happy. He didn’t point to anything that I got wrong. If he points out an error I’m happy to correct it. The reason I pick on him is I think his original idea is a really good one. I really do think we should get the profits from the polluting industries to pay for the transition away from them. But it’s obvious that this can’t be a PR, voluntary thing, right?”

Klein’s overarching point is that we won’t be saved by market-based solutions that come from elites. Real change isn’t in their interest, she says.

“You do have to get worked up. You have to take radical action. You can’t just make the gentle tweaks that people in power tend to be more comfortable with. This telethon model, billionaires promising to save the world, it’s not doin’ it!”

When Klein began writing the book five years ago, the sort of grassroots movement she was hoping for didn’t yet exist. “I spent a lot of the time researching this book depressed. I wasn’t seeing that counter power; I was sort of floundering. There’s no point in writing a book like this if there isn’t a movement that could run with it.”

Her darkest point came in 2010, watching the BP disaster unfold in the Gulf of Mexico.

“They were just sort of scrambling, trying to plug the hole,” she says. “They put a top hat on it. It was just so scary being there. The world is haemorrhaging oil. They’ve torn a hole in the bottom of the ocean and it’s gushing and they don’t know how to block it. I think the experience in covering the BP disaster was really formative for me on lots of levels, including the miscarriage that I wrote about.”

Klein’s miscarriage coincided with the oil spill. In one unexpected chapter, she writes with moving honesty about her fertility issues. She wasn’t sure whether she would actually publish this, she says, and she still seems a little surprised that she did.

“I do think it is weird to have such a personal chapter at the end of the book,” Klein says. “But I’ve only heard nice things about it. Except one reviewer said he thought it was distracting.”

She draws parallels between our impact on the environment and her own attempts to conceive with the help of what she calls “the Fertility Factory”.

“I did think there were parallels with the way we just throw chemicals at problems rather than understand the root of them. Having that kind of body knowledge, that body memory, that we’re not infinitely resilient, that we can be pushed too far, is important. I thought I would share that.”

The ecological issue “is so big that we can easily feel overwhelmed and I think that we as writers need to find ways of making it small for people.”

Klein did conceive. And she writes about how having a child changed her perspective. “But it’s not why I care,” she says. “In some ways we displace our own cares onto our kids. We’re afraid for ourselves. But it’s somehow easier and more acceptable to say you care about it for your kids.

Her son focused her worries. And new grassroots movements are giving her hope. In the latter parts of the book, she writes about several localised sites of resistance to fossil-fuel extraction.

“I was incredibly heartened by the march in New York City during the Climate Summit – 400,000 people on the street. You saw all of these people who had these very local reasons for wanting climate justice: the fracking movement, ranchers fighting the Keystone pipeline and indigenous people downstream from tar sands, all coming together under a climate banner saying: ‘Let’s build the infrastructure for the next economy instead of doubling down on the old economy’.”

Does she really believe that all these disparate groups can drive change?

“I have been part of social movements that have surprised the hell out of everybody who’s been a part of them. Mass social movements can emerge very quickly, whether it’s Occupy or the Indignados or the Arab spring or Hong Kong. The problem is we’re not very good at sustaining these movements.”

This Changes Everything: Capitalism vs Climate Change is published by Allen Lane