My Obituary: Michael Ryan, a counsellor who wrote a guide for gay teenagers

A series in which people help to pen their own obituaries: ‘Michael Ryan (who is still very much alive) helped people deal with life’s struggles through a mixture of tears, laughter and solutions’ 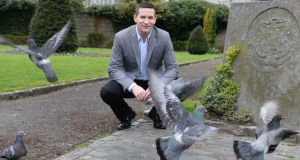 Michael Ryan (46) is a counsellor and psychotherapist with youths in Dublin schools and adults in private practice, and author of a guidebook for young gay people

His funeral was a simple civil affair with a cremation, followed by a hoolie in a pub with a singsong in one corner, a game of poker in another and a mountain of ham sandwiches, served with tea and Guinness.

As they sang, mourners recalled Ryan cautioning against getting too carried away while singing Cher’s Believe, as an over-exuberant rendition of this once burst a polyp in his larynx and he ended up in the operating theatre.

As a gay man, he struggled to find a life purpose after his degree in hotel and catering from Galway-Mayo Institute of Technology in 1993. His college pals recall him as a wild and reckless partygoer who still pulled off being named Student of the Year, a feat that remains a mystery.

He found his life’s purpose when he began his counselling career and settled down with his soulmate, best friend and lover, Gavin Duffy, whom he met in the George pub in Dublin in 1999. Those two events proved enough to give him everything he needed to live a happy, purposeful and fulfilling life.

Many of the mourners would have dined and partied at the couple’s home.

Ryan’s greatest contribution was to help thousands deal with life’s struggles through a healthy mixture of tears, laughter and solutions. A conscientious, thoughtful counsellor, he never judged, and remained loyal to anyone whose journey he was privileged to be part of.

His achievements included a book, The Complete Guide to Gay Life for New Explorers, which helped gay teenagers. He also established the Ethiopian Centre for Independent Living, a foundation in Ethiopia for people with disabilities. He was also regarded as a generous godfather of seven – Catherine, Danica, Katie, Ruby, Oscar, Ben and Denis – who nicknamed him “Snow White”.

His siblings – Deirdre, Clodagh, Bernard and Ruth – recalled him as “a bit of a messer, a peacekeeper and sometimes trouble-stirrer”, and as a funny chap who could always be relied on in times of need. His family, including his mother, Kay (his father, Joe, died in 1995), knew that his inquisitive nature was fed by his knowledge of the dangers of having only a little amount of information about matters. His colleagues saw him as a steady pair of hands, who would remain calm even on choppy waters with a gale blowing.

Ryan’s philosophy was that we don’t know what comes before or after our time on Earth, so we might as well assume that this is all we have. “Live each day through the lens of an old and dying you, and see if what you do today is what you will be proud of when you are recounting your life. If this is all we have, we owe it to ourselves to live a happy and fruitful life free of guilt and shame. Forgive yourself your past sins and don’t let them hold you back.”

The advice he wanted to leave for future generations was: “Never compare yourself to others, as you will always lose that competition. If you find that something is not working for you, change the way you do things, because if you always do what you have always done, you’ll always get what you always got.”

He learned that “the labels we are born with are just normal aspects of being a perfectly normal, imperfect human being. You must learn to love all of yourself, even if others would have you believe that you are in some way flawed”.

His parting advice was that “a few stretches, a regular walk and spending time with friends and family is the best investment in time on Earth.”

Because he lived every day as if it was his last in the grand roulette game of life, he had said that whatever date the ball landed on to call him from this earth was fine by him.