My Obituary: Megan O’Neill, ‘the girl next door with the voice of an angel’

A series in which people help to pen their own obituaries: ‘While the country-pop singer had a sunny disposition, she didn’t shower every day, or even every second day’ 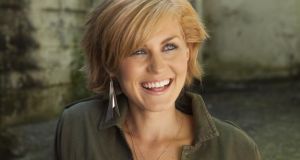 "If Megan O’Neill hadn’t existed, the Disney organisation would have invented her anyway.” In his eulogy for the singer, band member Dan Clark repeated something he had blogged following Megan O’Neill’s LA promo trip, which included Disney Studios, in the spring of 2015. The words were a distant memory but made everyone laugh, as O’Neill had just died at the age of 101. The animatronic Megan O’Neill dolls that repeated “Just think positive” have long been collectors’ pieces, but the few admirers still alive had not forgotten what Clark called her “keyboard smile”.

“The wholesome girl next door with the voice of an angel,” Clark had always said, although he never gave her the satisfaction of telling her how good she sounded while she was alive. She wouldn’t have listened anyway. She was the sort of woman you would have no qualms introducing to your mother, grandmother, great-grandmother even. If you were bringing her to a meeting at the International School for the Prudish and Easily Offended you could confidently introduce her to the headmistress.

Yet while O’Neill had a sunny disposition, she didn’t shower every day, or even every second day. It always amazed her what a good stylist could do.

It didn’t bother her that on her rise to the top she had worked seven different low-end jobs, as writing songs for her was “like therapy”.

At the celebratory funeral, everyone both present and past danced together, in one form or another. Dead or alive, everyone who had loved her attended as holograms, including O’Neill herself, enabling her to fulfil her goal of “always being there for her friends”.

Although she was always positive, she was familiar with sacrifice; being on the road, and spending time in places such as LA and Nashville, kept her away from family and friends for long periods. Time was the greatest gift you could give to others, she believed. She also made a mean risotto, although perhaps not as good as her mother’s spaghetti Bolognese, which was served at the funeral afterparty.

When hashtagged as “the Irish Carrie Underwood”, O’Neill didn’t complain. Her pet hates were lack of punctuality and bad coffee. Otherwise she was remarkably positive about her own progress, and grateful that she had found a path she loved.

Her favourite saying was, “Every day I’m getting better and better.” She also ate a lot of carrots, earning herself the nickname “rabbit”.

Her wisdom was based on strong personal values. Her attitude was, “Don’t sweat the small stuff. When the stress levels are high, ask yourself, ‘Will this really matter tomorrow?’”

On the other hand, she had an obsession with plastic spoons. Small stuff indeed. She loved them.

Her music colleagues recalled that she featured in Nashville, a US TV show, and appeared at the 02 Arena in London. She also performed at JJ Abrams’s Oscar Wilde party in Santa Monica, also attended by Stephen Fry (who graced the funeral as a hologram).

Also at the funeral (in hologram or human form ) were many of her notable Nashville co-writers, including Marc Beeson, Billy Austin and John Edwards.

But O’Neill’s bopping, smiling hologram upstaged everyone. Her father recalled that in her first-ever musical in junior infants, she was dressed as an owl and had to push all the other kids off the stage while singing the lyrics, “Go away, go away this is mine, mine, mine.” Indeed, it came to pass that it was hers.

Her album and a 500-piece puzzle she lost a few important pieces from.