My Obituary: Her only regret? Not having the body of Sophia Loren

A series in which people help to pen their own obituaries while they are still alive. ‘Her philosophy: never serve your customers food you wouldn’t eat yourself’ 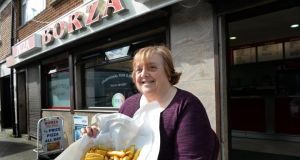 Teresa Borza Di Nardi: ‘A perfectionist, she was always proud that they served only fresh potatoes.’ Photograph: Eric Luke

At a grand old age, she was waked at her home in Tallaght village beside the Borza family chipper, with children playing around her as mourners told funny stories about her, ate homemade Italian food and said the rosary every few hours.

Teresa Borza Di Nardi had planned her funeral meticulously decades before her death. She had learned too young that the only thing certain in life is death. Don’t Worry, Be Happy was on the song list for the funeral in St Mary’s Priory, Tallaght.

Her sense that death was always close began when she was a teenager. She was in the car crash that instantly killed her 20-year-old older sister, Assunta, who left behind 17-month-old Francesco and husband Domenico Di Lucia. In Di Nardi’s eulogy, it was recalled that she had said (while talking with her hands like an Italian, as always): “When Assunta died, a piece of me died with her.”

Having endured many family tragedies, she had always hoped to be reunited in the afterlife with Assunta, with her father, Donato, who died suddenly in 1994, with her brother Barbato (Barbi), who died in 2007 after complications from surgery, and finally with her own mother, Mariantonia, who died of heartbreak six months after “Barbi”, having lost a husband and two children.

As the funeral Mass progressed, mourners knew that, one way or another, she finally had her answer about whether this afterlife reunion was taking place.

Her funeral plans had included being buried with the rest of her Italian family in her home town of Casalattico, where she had a plot with an uninscribed marble headstone already in place.

Casalattico, in the Italian region of Lazio, had seen many young people emigrate to Ireland in the 19th and 20th centuries. There some had founded chip shops and others joined family businesses. More than 8,000 Irish-Italians have their origins in Casalattico and nearby Picinisco.

She had returned to Casalattico every summer of her life, as did many Irish-Italian families. Her happiest childhood memories had been the three-day boat and train journeys from Dublin to Italy.

At the graveside was the love of her life, husband Gennaro Di Nardi, whom she had met when she was 18 and he was 19. Having left Loreto High School Beaufort at 14 to work in the family chipper business, she married Di Nardi in 1976. They had two children, Francesco and Assunta.

Ever the romantic, she had loved to recount the story of her own parents, Donato and Mariantoni, who had both emigrated from Montattico, a beautiful village high in the mountains of southern Italy, near Casalattico. Her father had arrived in Belfast in 1950 to work in the Cafolla family business. Her mother arrived two years later to work with her cousins in the Miami Cafe in Dún Laoghaire. They met while Mariantoni was in Belfast nursing an ill relative, and Donato called in after a football match. Their love letters, rushed between Dún Laoghaire and Belfast, became Di Nardi’s most treasured possessions, which she left behind for her children. Her parents went on to open three Borza takeaways, with Di Nardi and her husband taking over Borza Tallaght.

A perfectionist, she was always proud that they served only fresh potatoes, peeled and cut on the premises, and the freshest fish. Her philosophy was: “Never serve your customers food you wouldn’t eat yourself.”

Her only regret, on passing, was that she did not have Sophia Loren’s body.

Her biggest fear was that her four grandchildren would be too young to remember her.