In the first of a new series, Duke Special helps to compose the obituary he would like to have when he dies, and plans an unforgettable funeral 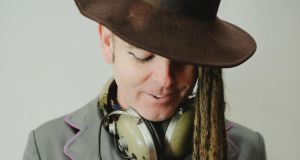 Duke Special: ‘One friend recalled that he had an awkward habit that could cause social embarrassment. It could nearly be called a psychic tick’

My Obituary is a new column, launched today, in which people are given the chance to write their own obituaries while they are still alive. Some may be famous, others not so much, and we plan to include self-written obituaries of Irish Times readers who feel up to the task of writing them as a way of reflecting on their lives. Who and what has meant the most to you? What experiences and people changed your life? What would you like to leave behind, be it advice or property? What will people say about you at your funeral? Each contribution should be 650 words and reflect your own life experience and personality. To be part of the series, email myobituary@irishtimes.com

No one could forget the coffin. At his funeral, composer and musician Duke Special’s coffin was lowered slowly into the ground. Then, just before being laid to rest, the coffin containing his 73-year-old body began to shudder. It rose up again of its own accord, shocking mourners. The coffin then fell gently down again (surely the previous rising from the dead was a mechanical error).

As everyone breathed a sad sigh of relief, the coffin again began to shudder and creak. It rose all the way to the surface; was lowered; rose again. This macabre coffin ballet continued over and over until the mourners got tired of it and left.

The mourners comprised his friends and family, most especially his three sons (aged 12, 15 and 18 in 2015). By the year of Duke Special’s death in 2044, there were of course also many grandchildren at the graveside.

At his funeral, which may or may not have been in a Presbyterian church, his friends – who knew him as Peter Wilson – described him as “a good friend, and kind”. And while they knew all too well about his flaws, many from personal experience “on tour”, these weaknesses were described with discretion. The most important thing was that they knew he loved them.

One friend recalled that Wilson had an awkward habit that could cause social embarrassment. It could nearly be called a “psychic tick”. Since he was used to being so different from other people, he would tune in to other people’s difference subconsciously, often naming these quirks.

One example of this happened on his first day at Down High School, where he was paired with a girl with whom he was meant to share something of himself in the interest of class-bonding. He blurted out to her that he had a wooden leg. Looking at him in surprise, she said this was nothing to joke about. She actually did have a wooden leg. He apologised, of course, but this weird habit of picking up on other people’s strangeness was something he was to experience again and again.

Having named himself “Duke Special” in 2002, adopting a half-head of dreadlocks, eyeliner and hobo-chic attire, the musician took a circuitous route to becoming an exceptional composer, pianist and singer. His work was not confined to pop, but embraced a broad sweep of genres.

After doing A-levels in music, he joined a band and went to England, where he did community work while developing his craft. His greatest struggle for the next decade and more was “becoming comfortable in my own skin”.

Growing up in Downpatrick with three older sisters, with whom he shared teasing, affection and lots of practical jokes, the man who would be Duke was, as the youngest son, naturally charming and comfortable with women. But his greatest achievement and his greatest love was for his three sons, who he had living with him half the week, although he tried to be “a great Dad every day of the week”. He loved his boys “unconditionally”.

His eulogies were spoken by his closest friends, musician and producer Paul Pilot and poet Padraig O Tuama, who has a special interest in literature and theology. Both of these men had seen the good and bad side of Wilson and he would have wanted their honesty reflected in the stories they told about him.

Both agreed that Wilson’s greatest strength was generosity and that his life reflected the spiritual journey he had been on, starting with his family background in the Presbyterian faith. He regarded formal religion as tarnished and warped by those who used it as a weapon and a form of abuse. While this had turned many of his friends off spirituality, he liked to think he could still engage with the positive aspects, such as the search for meaning.

Wilson hadn’t been expecting a transfer to the afterlife, and his belief in “God” was described thus: “He believed in faith, he believed in doubt, and he believed in light and hope and love and grace. He knew these positive values came from somewhere, and that good and evil existed. You just had to look into yourself to see the struggle between them.”

The highest compliment paid to him at his funeral service was: “He followed his gut and dared to go on lesser trodden paths.”

One of these was his collaboration with the Metropolitan Museum of Art’s Department of Photography. He wrote a song suite influenced by the works of pioneering photographers Paul Strand, Alfred Stieglitz and Edward Steichen (co-writing mostly with UK songwriter Boo Hewardine, although Neil Hannon assisted). He did this, reported The Irish Times, “in his singular, often superb way, document[ing] the lives not only of the photographers but of the people and scenes in their images. This is luxurious left-of centre music (the RTÉ Orchestra provides sumptuous backing) from one of Ireland’s most supremely unconventional talents”.

Wilson wanted people to feel something when they heard his music, and that what he created was both beautiful and funny. At his funeral both kinds of music were played, so the mourners could laugh, feel moved and melancholic in a catharsis only music can create. One of the musicians at his funeral was Derry singer Soak, who he helped discover when she was a mere 18 years old and who supported him on tour in 2015.

He also requested that the music of Estonian composer Arvo Part be played.

Were he to leave the planet tomorrow, Duke Special would have liked to have a house in the country with a recording studio, to own a dog, to learn to dance old-time swing, and to have a gas cooker in his kitchen.

Look Out Machines! by Duke Special is out on April 3rd. He play’s Vicar Street, Dublin, on May 16th. dukespecial.com