My Obituary: Annabel Karmel, the woman who ‘banned bland’ from kids’ meals

A series in which people help to pen their own obituaries: ‘The death of her first child inspired Karmel to start a business dedicated to the wellbeing of children and families’ 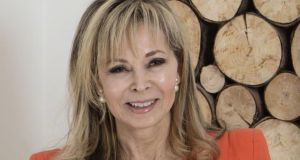 My Obituary is a column in which people are given the chance to write their own obituaries while they are still alive. Some may be famous, others not so much, and we plan to include self-written obituaries of Irish Times readers who feel up to the task of writing them as a way of reflecting on their lives. Who and what has meant the most to you? What experiences and people changed your life? What would you like to leave behind, be it advice or property? What will people say about you at your funeral? Each contribution should be 650 words and reflect your own life experience and personality. To be part of the series, email myobituary@irishtimes.com

As her family and friends ate a delicious buffet brimming with some of the most popular recipes from her Family Cookbook, everyone recalled that Annabel Karmel – the woman who “banned bland” from young children’s diets – had unwavering determination.

She was passionate and strong-minded, always fighting for her cause no matter what the obstacles.

The funeral was a celebration of the life of a woman recalled as an untidy night owl, and was attended by her three surviving children, Nicholas, Lara and Scarlett; her partner, Stephen; ex-husband, Simon Karmel; her three dogs; and Bono.

Also present was her mother, Evelyn, whom Karmel said had loved her more than anyone, as the mourners listened to the strains of Ravel’s Allegro for Harp.

Karmel began her working life as a talented harpist. Her mother had believed that the size of the instrument and the dedication required would keep her daughter away from boys. And indeed, the hours of practice made her early life quite solitary.

This all changed when she became a harp-playing Cinderella in a pantomime with Dennis Waterman and Rula Lenska.

She made a video with Boy George, and established a group, Harp Attack, which played Bee Gees numbers. She had asked for these to be played at her funeral, along with Where Is Love? from Oliver.

Coming to terms with the death of her first child was her greatest struggle. She used to wake up thinking she had had a bad nightmare before realising it was true. Natasha died at the age of three months from a viral infection that caused encephalitis.

Natasha’s short life inspired Karmel to start on her food journey, her first cookbook – The Complete Baby and Toddler Meal Planner – and an entire business dedicated to the health and wellbeing of babies, children and families, which she regarded as her greatest contribution.

The popularity of her first book led her to write 39 more, including 2015’s Mumpreneur, in which she sought to inspire other women to start businesses from their kitchen tables. Before she died, Karmel launched a range of 33 locally produced food products in Australia, which she had designed to combat the childhood obesity epidemic by replacing junk food with affordable and healthy foods that were quick to prepare.

One of her most amusing moments, recalled at her funeral, had occurred on the set of a US television show, when the presenter fed kiwi from one of Karmel’s fruit sticks and dip to a small child, who promptly vomited all over the set. No one had known the toddler was allergic to kiwi.

“If you seldom fail there is a good chance you’re playing it too safe,” she once said. “Failure rarely feels fun at the time, but the lessons it teaches may not take long to become apparent and are likely to lead you on to greater successes in the end . . . Self-belief is as important as competence, if not more so.”

In her final words, she quoted George Eliot, who said, “It’s never too late to be what you might have been.”

Karmel’s persistence and focus, rather than regret, got her to where she felt to be a good place.

She once said: “If you want life to be magnificent, you can’t expect it to be easy. Nobody can go back and make a new beginning, but anyone can start today and make a new ending.”

As a believer in the afterlife, Karmel wanted to be reincarnated as one of her own children, whom she brought on family skiing trips (once tying a lacy bra to the guide’s backpack) and to whom she gave a lifestyle that had more opportunities and freedom than her own.

She was fond of saying a parent could be “only as happy as their least happy child” and she saw her own three as “very happy”. Her children were the greatest loves of her life.

Establishing “the ultimate parenting community” platform, where parents could share mutual support and tips; and running a dogs’ home.

Mumpreneur is published by Vermillion

It's crystal clear, making this soup is a job for the dedicated, or the deluded
10