My Obituary: A feminine woman who tore phone books in half

The very-much-alive Mama Lou, a strongwoman, helps to pen her own obituary: ‘She realised that if an abusive relationship could happen to her, it could happen to anyone’ 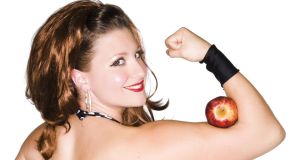 Mama Lou: If she had kept her job in human resources at Axa financial, it would have all been so different

A joyful circus full of performers and artists told the story of her life in a funeral celebration set to the Rocky soundtrack, with a sprinkling of music from Taylor Swift and Katy Perry.

It reminded everyone of her favourite film, Big Fish by Tim Burton, as the tale of her life was told through the people she had encountered.

Mama Lou, who lived in Austin, Texas, died from lead poisoning following an incident with a rogue pencil she was breaking with her butt muscles. If she had kept her job in human resources at Axa financial, it would have all been so different.

Her degree in religious studies from Hunter College in New York City did not send her on a predictable path.

But the four-time Guinness record holder’s greatest struggle was personal – having people doubt her power just because of her outside package of femininity.

It dumbfounded her that people could believe magicians were actually “magic” while at the same time they couldn’t believe that a feminine woman could actually be strong.

She always aimed to change people’s minds, each time she rolled up a frying pan or tore a telephone book in half.

Becoming Mama Lou had changed the way she looked at life. It gave her the courage to say yes to the ridiculous possibilities life offered. She feared nothing after she learned that “a mix of karmic acceptance and hard work could take you to the life you were meant to live”, as she had told friends. She believed that nothing was impossible as long as she kept trying and wasn’t afraid of failure.

She would watch the faces of children as she performed and see such conviction in them. “After watching me, they believe in themselves,” she once said.

She spent up to six months a year on tour, doing 450 shows per year. The rest of the time her private life was one of routine, especially in the winter. She ran every day, volunteered at an animal shelter and loved to cook while listening to 1960s soul. Those hands that could rip a deck of cards in half could also sew, knit, whip up a quick quiche and play ukulele.

She was a loner, probably because she travelled so much, leaving pieces of herself wherever she went.

Her greatest achievement was her realisation that she was truly happy. Not an exuberant happy, but the kind that came when she asked herself, “If you could be anywhere else right now, doing anything, what would you do?” She answered that she had everything she needed in the now.

She was ashamed of certain things, such as judging herself based on her weight and size more than she would have liked to. She was also ashamed and embarrassed after escaping an emotionally abusive relationship. She couldn’t understand why she hadn’t been smarter, braver, known her own boundaries and respected herself more. She said at the time, “But I’m the strongwoman! How did I get myself into this situation in the first place?”

She realised that if an abusive relationship could happen to Mama Lou, it could happen to anyone. And yet she was proud of showing children of both sexes that a woman can be physically strong; it was her contribution to what she saw as the final wave of feminism.

Her greatest self-criticism was that she had a fondness for cheesy inspirational quotes and saccharine sweet anecdotes. She would also recount incidences of failure in her shows – trying to break green apples with her biceps, for example, hadn’t been a good idea, leaving the audience wondering why she was brutalising herself for their entertainment.

And once, in Singapore, she bought decks of cards for her show and didn’t test them until showtime, when she discovered they were made of plastic and impossible to rip in half.

Although she didn’t believe in an afterlife, she did imagine one in which, at the pearly gates, she was greeted by Mr T, Dennis Rogers (World’s Strongest Man) and The Rock, who would have lifted her up on to his big shoulder and carried her to her new heavenly home, as Jack LaLanne made juices for everyone and Charro led a Zumba class on a cloud.

Not marrying and not having children.

It's crystal clear, making this soup is a job for the dedicated, or the deluded
10