‘Men in Ireland don’t whistle when you’re walking by’

New to the Parish: A woman who moved her family to Dublin after her native Croatia’s accession to the EU believes life is easier for women in Ireland 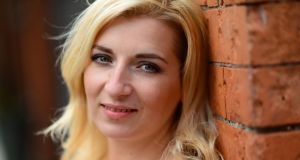 Ana-Marija Hota: “In Croatia we like the Irish culture and people, the way they’re more laid-back, like we are.” Photograph: Dara Mac Dónaill

Ana-Marija Hota spent a large part of the early 1990s hiding in basements under the city of Zagreb. When the air-raid sirens rang out across the Croatian capital, she and her classmates would follow their teacher across the road to a local bar and down an old staircase to shelter from the bombs that could fall on the city at any moment.

“We would sing war songs; our teachers tried to make it fun for us. I remember a lot of sirens at the time and sleeping in basements. Also not being able to go to school or on holidays.”

Even as a child, Hota, who was nine when the war broke out in Croatia in 1991, understood that the citizens of Zagreb were the lucky ones. “We were in the luckier part of the country because other cities were destroyed. Zagreb didn’t change much during the war, but there was this fear of not knowing what the future would bring because the conflict was always just a couple of hours away.”

Life before the war was “perfect”, she says. “The 1980s were really great in Croatia because you could fly in a plane from Dubrovnik to Zagreb, and we went travelling and ate in nice restaurants.”

She says the Croatian economy never really fully recovered after the conflict ended in 1995. Once she had finished school, she trained to work as a hairdresser but struggled to get by on her tiny salary. When she turned 21 she set up her own salon with the support of her parents.

“The last job I’d applied for, they offered me a salary of €300 a month. My dad said ‘This is ridiculous’, and they helped me set up my own business.” For 10 years she worked hard at developing a loyal clientele in her Zagreb hair salon. “It was always busy but I couldn’t really charge the price that I wanted. I was working six days a week and had on average eight days of holiday a year.”

In July 2013 Croatia joined the European Union. Two months later Hota booked one-way tickets to Dublin for herself, her two children and her husband. She had already investigated moving her young family to the UK, but discovered there were still work restrictions in place for Croatian nationals despite her new EU passport. “I didn’t bother with the UK. I decided: if they don’t want me, I don’t want to go there.”

She wanted her daughter and son to speak English fluently and contacted a friend in Dublin. “In Croatia we like the Irish culture and people, the way they’re more laid-back, like we are. The Irish are hard workers but have a good life quality too.”

When she told her husband about her decision to move to Ireland, he responded in a nonchalant manner that they could go wherever she wanted.

“I don’t think he thought I was serious, because I’d been talking about moving for years. I don’t think anyone took me seriously; they thought it was just a phase. Then, out of the blue, I said, ‘Okay, we’re moving next month.’ ”

Within four weeks she had sold her business and her car, and packed up all the family’s belongings. In September 2013 they arrived in Dublin, where she had already secured a job in a hair salon. “I told the kids it was an adventure. From the start they loved the idea. I showed them pictures of Irish beaches and castles.”

Her seven-year-old daughter, Nina, did not speak a word of English when she started school. “At the beginning it was hard for her because she couldn’t speak, but she could understand when the other girls said they didn’t want to play with her. But she picked it up really quickly. Her teacher was so kind and helpful, and within a few months Nina was doing her homework alone. One day she even came home speaking Irish. I was so happy and immediately knew I had made the right decision. Even for that single reason, for Nina to speak English and to open her mind.”

Two-year-old Filip easily adapted to the family’s new life in Ireland. Hota’s husband started up his own web design company while she began working as a hairdresser in a salon in Ballsbridge.

“I noticed the women in Ballsbridge had a lot of money. Some of them would have blow-dries twice a week. It was nice for me to feel relaxed, knowing that I would have a job because it was always so busy.”

Hota now works in the Grooming Rooms barber shop on South William Street in Dublin. She also keeps an online blog of her experiences as a Croatian living in Ireland. She began writing the blog in Croatian for friends back home, but started posting in English as the site grew more popular.

“I started translating to English at the end of last year, because I wanted everyone to be able to read my story. Writing it is almost like a type of healing; it’s like therapy. I like that I have a voice, that I gave myself a voice.”

She says life is easier for women in Ireland than in Croatia. “Croatia is a patriarchal society, and here I feel it’s the opposite. Yes, in Croatia we have equality and women have the right to abortion, but it’s just the little things here. The men in Ireland don’t whistle when you’re walking by. It’s just those little things that make it easier to be a woman here.”

She looks forward to seeing her daughter and son grow up in Ireland. “I love it here now. It’s home. We have so many more opportunities here, and I like the feeling of stability. If I want to look for another job or even change my profession, I feel that’s possible here; in Croatia it wasn’t. There’s no way I’m going back to Croatia, I don’t want to go anywhere else.”

We would like to hear from people who have moved to Ireland in the past five years. To get involved, email newtotheparish@irishtimes.com. @newtotheparish